Off Broadway, Play
Runs through 11.1.15
The Public Theater, 425 Lafayette Street 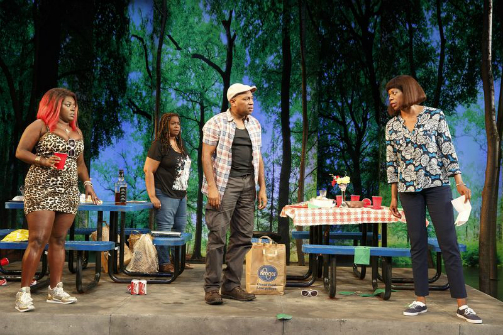 Per usual, Robert O’Hara serves up another meaty and salty play in Barbecue. Known for his last season hit Bootycandy, O’Hara returns with another comedy dissecting race and identity in this world premiere at The Public Theater. This time, however, the show is less autobiographical but still as incendiary—plot points are so surprising that Playbills were not distributed until intermission as to not create pre-show reading assumptions.

And that’s at the medium-well center of Barbecue: to not let audiences make assumptions about its characters or motivations. What starts out as a family gathering in a park (realistically designed by Clint Ramos) with zippy and often hysterical dialogue in Act I turns into something much deeper, though sometimes messier, in Act II. This is one of the show’s strengths and also one of its weaknesses: it is not afraid to make a 180 degree turn, from a bubbly comedy into something more profound, but by doing so the plot becomes muddy.

Still, O’Hara knows how to entertain, and director Kent Gash knows how to play with his cast. Heather Alicia Simms is a standout as vivacious Marie, and her physical comedy bit midway through the first act nearly stops the show. Constance Shulman, with a voice as familiar as Morgan Freeman’s, is similarly wonderful as trashy sister Adlean. And when all the siblings dance as a way to lighten the mood around the planned intervention for druggie sister Barbara, it’s often hard to hear the dialogue over the laughs.

The aforementioned intervention is the ulterior motive behind the barbecue. The siblings—three women and one man—all wait for Barbara, who they expect will come because of the free booze and hope will stay, as addicts are supposed “to be close to nature and shit,” as Lillie Anne (Kim Wayans) proclaims.

Barbara arrives, and the question of her going to rehab creates an Act I closer so suspenseful and brilliant that it will be hard to outdo this season. (Though with the growing tendency to write full-length one-act plays, O’Hara might not have much competition.)

The plot gets messier at the top of Act II when Barbara (Samantha Soule), only seen briefly at the end of Act I, becomes the focal character in a belabored scene with an egotistical celebrity (Tamberla Perry) who has an interest in Barbara’s drug addiction. Without knowing Barbara well enough it is difficult to be as emotionally invested in her as O’Hara wants us to be.

Despite Barbecue's murkiness, O’Hara succeeds in planting some questions that linger long after the play’s celebratory ending. He is once again preoccupied with who gets to tell our stories, and luckily in this case it is O’Hara who has the pen.