By Sophocles; Adapted and Directed by Sam Silbiger
Produced by The Cradle Theatre Company 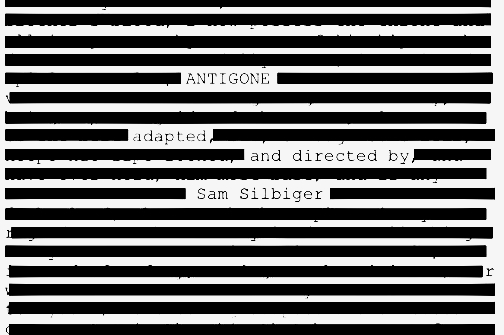 BOTTOM LINE: This abstract retelling of a classic Greek tragedy—staged in total darkness—is a compact and severely poignant one act.

In the lighting fast experimental new take of Sophocles’ Antigone, directed and adapted by Sam Silbiger with assistant direction by Emily Moler, the classic tale comes alive as a world rich in symbols and theatrical grandeur. Silbiger packs it all in just 40 minutes of thought and heart-wringing stage craft. Although I had a really intense and deeply satisfying experience, I must foreworn that this is not your grand pappy’s Antigone. Beginning with a seemingly elementary adjustment—setting the show in pitch darkness—Silbiger forges the story out of pure live experience addressing an audience’s role in the theater as both of witnesses and accomplices. A genuine sense of dread arises from the spectators as they, one by one, clue in that this play won’t have a traditional ending, or any sort of complacent resolution.

True to the experimental theatrical art form, Silbiger has carefully selected several theatrical conventions to break, primarily lighting and resolution. There is no lighting beyond the utilitarian glow-tape marks and the red ambiance of the emergency exit signs; on top of that, all of the action happens in close proximity to the spectators. As for the ending, Silbiger leaves it up to you, the spectators, to decide when this story and this experience are truly over.

The ensemble is raw and completely dedicated to the experiment. Identifiable by her husky voice, Antigone is intense as she pleads and rages against Creon, who hisses with condescension like a smarmy coiled panther. The sisters' showdown, between Antigone and Ismene, feels fresh despite being voyeuristic and disturbing; in the darkness it genuinely feels like we should not be hearing their deeply personal drama. Infused with Suzuki staging practices, the cast create an atmosphere with sound patterns of sighs and breathes, of huge exhaltations and desperate whimpers, additionally utilizing fleshy percussion by clapping and stomping the floor. By Ismene’s bewailing moans we know that she has no choice but to turn away from Antigone; we can sense and feel her heartache with unmistakable clarity. The ensemble’s immediacy and attention to detail turn this unique adaptation into an auditory drama.

By turning the lens inwards this retelling focuses on the validation we, as audience members, crave during theatrical events. In post-show conversations, I discovered that several members of the audience were also asking themselves, "how should I be feeling right now?", throughout the twists and turns of the production.  Here lies the key to Silbiger’s Antigone—he’s after a genuine, rich, live experience. What you feel is the actual drama of the evening. His Antigone is an anxiety ridden puzzle that is highly watchable and totally absorbing.

The final moments of Antigone are genuinely surreal. The stage is littered with limp, deadened-looking shapes while the din of the bar outside starting back up for post-show festivities trickles in. It’s an intensely gripping final few minutes; you will question yourself whether you’re doing something wrong by staring upon this lonely, quiet devastation, as the outside the world ignorantly move on. You might experience the same jolt of repulsion and obsession you get when you come across newspaper articles with pictures of mass graves or of victims of tsunamis washed up on some distant shore. The symbols are unique to each spectator, and are no doubt too timely to ignore: maybe you see dead bodies in the wake of horrendous attacks, or perhaps to you they will be sleeping castaways dreaming of reaching some new home in the morning, or maybe some will identify these defenseless shapes as prison inmates caught up in the merciless workings of systematic incarceration.

Collectively, as a society, we try to move past these images; to ignore, to negate, and to black them out entirely. Sam has literally blacked out the images, guiding us all along instead on a quest of self-reflection. By giving us, the audience, agency to decide when the show ends, Silbiger facilitates a psychological game of tug-of-war. On the one hand, he gifts us the ability to just move on, on the other he seems to ask ‘what if you just stay here?’ Suddenly the immobile shapes are larger, stranger and more dangerous. The rules of being a spectator are flipped, and the show is transferred onto us. ‘What if we can’t move on?’ By the time you leave, Silbiger will have initiated you as more than just an audience member but as a participant as well, whether you realize it or not.

(Antigone plays at The Secret Theater, 4402 23rd Street in Long Island City, through November 22, 2015. Remaining performances are November 21st at 10 and November 22nd at 10. Tickets are $15 and $12 for 25 and under. To purchase tickets visit thecradletheatre.org/antigone.)

Sophocles’ Antigone is adapted and directed by Sam Silbiger with Assistant Direction by Emily Moler. Presented by The Cradle Theatre Company.