Animals Out of Paper

By Rajiv Joseph; Directed by Merri Milwe
Produced by YOLO! Productions and The Great Griffon 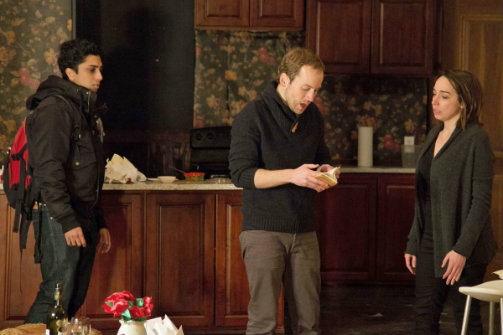 As Animals Out of Paper opens, Ilana (played with brittle grace and clunky disquiet by Nairoby Otero) is home alone, languishing on the couch in her cluttered two-room apartment, when her doorbell rings. It’s a miserably rainy evening and since she is not expecting visitors, she ignores the insistent buzzing. But the person at the door is not to be deterred. Finally, in the first of several odd choices, she relents and lets the soggy stranger enter her flat.

Except that he’s not a stranger. Although she has no memory of having met Andy (played with earnest, if creepy, intensity by David Beck), he tells her that he is from an organization called American Origami. He’s met her several times, he says, at the group’s annual conference, and even attended a workshop that she – a noted origami master – had facilitated. Furthermore, he reports that her book, a treatise on the Japanese art of paper folding, has been hugely important to him. He’s tracked her down, he says, because not only has her membership in the organization lapsed, but because several mailings have been returned, addressee unknown.

That she does not rush to call 911 is mystifying; alas, they converse. Secrets are quickly revealed and Andy, as hang-dog a sad sack as ever existed, finally gets to the real point of his visit. Will Ilana tutor origami prodigy Suresh (Maneesh Sasikumar), who is one of Andy's students? For his part, Suresh is supposed to be an 18-year-old hip-hop enthusiast slash street-smart wanna-be gangsta who is in mourning over the recent loss of his mother. And herein lays the problem. All three characters appear to be the same age, so the tension that should have unfolded between the elder pair and the boy never happens. Instead, heavy-handed dialogue tells the audience what they are expected to feel.

“Folds leave scars,” Alana tells Suresh, ostensibly describing the impact of changing the shape of a piece of paper. “It will never be what it was before it was touched.” Yes, if it wasn’t obvious before, we now get the metaphor: over the course of several weekly visits, Suresh and Andy have touched Alana emotionally, helping her to tap into the creativity that became dormant after she and her husband split and her dog ran off. Needless to say, she has also touched them.

Perhaps different casting would have enhanced the drama, but as it stands, a well-designed set (by Ran Xia), great recorded music, and terrific lighting design (Claudia Toth) cannot make up for the deficits in this production. Andy comes off as repellently weird, while Ilana seems too depressed and self-hating to serve as either the muse or temptress we are expected to believe she has become. In fact, neither character is multi-dimensional enough to be compelling. Worse, given the many themes that Rajiv Joseph is attempting to explicate – loyalty, friendship, and romantic chemistry, among them –  the sparks start to smolder, but never fully ignite. The end result feels flimsy, like a folded scrap of reworked paper, and even if it’s pretty, it’s far too fragile to last or turn into anything meaningful.

(Animals Out of Paper plays at the McAlphin Hall, West Park Presbyterian Church, 165 West 86th Street, through February 28, 2015. Performances are Thursdays through Saturdays at 8 PM and Sundays at 5 PM. Tickets are $18; to purchase visit SmartTix.com or call 212.868.4444.)