By Maria Milisavljevic; Directed by Maria Mileaf
Produced by The Play Company 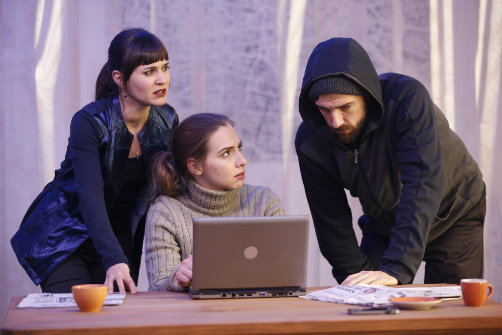 Now in its 15th year, The Play Company (PlayCo) strives to stay true to its founding goal of promoting global theater and international voices. In keeping with that mission, Playco’s latest production, Abyss, is written by award-winning German playwright Maria Milisavljevic, directed by Maria Mileaf, and explores loss, the horrors of war, and diasporic displacement. And if there is any truth to the concept of “universality,” then Abyss trespasses upon that territory too, by concentrating on explorations of memory and love.

At the heart of this exploration are the characters “I” (Flora Diaz), “She” (Nicole Balsam), and “He” (Carter Hudson). We don’t know these characters by these names. We only know them as the many roles they inhabit throughout the story, the most central of whom are “I,” a Serbian woman whose name is never mentioned; Vlado (Hudson), a Serbo-Croatian immigrant who is I's friend; and Sophia (Balsam), I’s younger sister. Hudson and Balsam play many additional characters; Diaz plays only the one, interacting with the others but also narrating the action while still in character.

Then there is Karla Richter, unseen except for the posters put up all over Berlin (the play's primary setting) in response to her recent disappearance. It is Karla’s disappearance which fuels the events of the play, and it is the primary characters’ memories of Karla which inform the context of her disappearance. Karla’s absence gradually reveals the complex relationships between the characters who struggle to understand themselves and the impact of their haunted pasts. The backdrop of the play’s action is the dissolution of the former Yugoslavia from which the central characters hail, Germany’s open door policy to refugees and immigrants from other European nations, and the lasting psychological trauma of war. These international themes are subtly referenced but not entirely emphasized. They are evoked primarily when providing a context for the characters’ motivations, internal turmoil, and, ultimately, their choices.

Promoted as a “poetic thriller,” Abyss depends upon lyrical text, opacity, and, to a degree, metaphor and an abstract narrative. However, Abyss is lengthy and requires an intense focus in order to follow and find the story’s nuances. While this type of writing could be magical and thought provoking, in spite of any compelling concerns about the underlying political themes, it can also result in a degree of frustration and a level of indifference as regards the characters and the events. The most magical part of the production is the atmospheric interplay of the set design by Neil Patel and the saturated blue rhythm of the lighting by Matthew Richards. In a recent interview, playwright Maria Milisavljevic, who adapted the play from the original German text, describes the difference between the reactions of German audiences and English-speaking audiences to Abyss, saying “German theatre goers just don’t mind to leave the theatre utterly confused [….] the biggest compliment friends in Berlin would make me about my play was: ‘We spent two weeks talking about it. To figure out what it all meant.’” And while the performance I attended included a talkback for such figuring out, it was a challenge to leave the theater feeling compelled enough by the play and its characters to talk back.

The cast is Nicole Balsam, Flora Diaz, and Carter Hudson.