Choreographed and Directed by Kyle Abraham 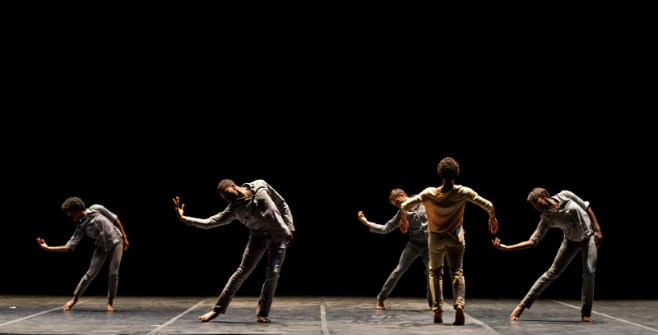 Abraham.In.Motion in The Quiet Dance. Photo by Sharon Bradford.

BOTTOM LINE: Kyle Abraham pushes his perspective on social injustice into the concert dance arena where it finds strength in his cast of dancers, film, costumes, musicians and other collaborators.

This evening of Kyle Abraham’s four contemporary dances starts out slow and subtle and builds into a political multimedia machine by the end. In a pool of light in the audience, Kyle Abraham moves his molasses-like arms with a gentle locomotion to a solo pianist. This subtle movement turns into a rapid fury like a moth fluttering towards the light. Prelude introduces us to Abraham’s stylistic arm gestures that seem as if we are witnessing vines growing in fast forward.

The Quiet Dance is an ode to Abraham's father and it’s full soft moments lead to frenetic arms flying through space that seem unattached to an owner. The impressive Connie Shiau's limbs seemed to move like a swan’s, aggressively at moments and then with poise. Her solo is in counterpoint to the other four dancers, who echo back with moves that look like the rocking of a baby all whilst the music fades in and out of the scene. Kristi Wood’s pastel costumes add to the demure nature of the piece. From start to finish, the sensitivity of Kyle Abraham’s choreography comes through in his stillness and bursts of explosive energy.

Abraham takes on the huge responsibility in documenting the Black American experience through dance in his NY Premiere of Absent Matter and his 2014 work, The Gettin. The expression of these events in modern dance is often dated and stark in contrast. The dangers lie in oversimplification of complex racial issues. Many audience members have the luxury of turning a blind eye to these issues, but Abraham recalls the past in his choice of music and literally with color in Absent Matter. The piece starts with a film on the backdrop as Abraham dances on a panel of white. This starts perhaps the revealing of the hidden layers of racial divide as the white panels are removed to see black floor underneath.This dance’s soundscape is a compilation of Kris Bowers and Otis Brown III’s music as well as rap and spoken word from Common, Kanye West and Kendrick Lamar with constant references to brutality in the black community and the land of milk and honey. The floor is gently stripped of its black layer to reveal more white. The white flowing costumes, by Karen Young are cleverly painted in panels that resemble the floors delineations between black and white.The dancer’s movements vacillate between aggressive and cutting to soft and yielding in a moment's notice. There is a lot of strong symbolism in this piece, like its all-white set and industrial lighting by Dan Scully, but it shies away from imposing a strong opinion on us. It raises the issue of perspective, but lets you draw your own conclusions.

The Gettin is a longer piece that evokes the turmoil in the U.S. regarding segregation in the 1960s. The score, written by Robert Glasper, is based on Max Roach’s album written in response to the Civil Rights Movement called We Insist! Max Roach’s Freedom Now Suite. This final piece of the evening features a long duet with Jeremy Rae Neal and Matthew Baker beside a still of the Ferguson shooting. The two men of different races dance similar movement and at times support and bear each other’s weight. There are power struggles and it feels as if Abraham can’t decide if they are equals or not. At one point, the two men take their shirts off and seem to move their upper backs and arms as if flying and transcending the barriers of race, but then they separate and everything seems to go back to the way it was, so to speak. This piece recalls the past, even with its beautifully modern-printed full skirts, but pushes against what we already know, that race is still a sensitive subject. I look forward to Abraham challenging us to rise up to the occasion with his talented dancers and fluid port de bra leading the way.