The Zombies: A Musical 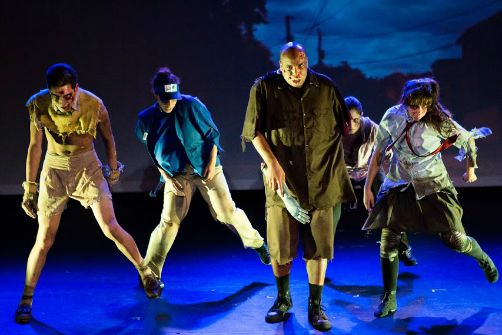 A scene from The Zombies: A Musical. Photo by Hunter Canning.

BOTTOM LINE: The Zombies: A Musical is a mish mosh of zombie storylines that would be more at home in a fringe festival.

The Zombies: A Musical is a musical assembly of a variety of horror tropes ranging from Night of the Living Dead to Shawn of the Dead and "The Walking Dead." While presented in an off Broadway house with ticket prices ranging from $60-$75, the production is a bit more suited to a fringe festival or an off off Broadway venue, as the technical aspects don't feel fully realized, which makes the production seem unnecessarily unpolished. The story is full of an assortment of archetypal characters: the angry black woman (Tammi Cubilette), the goth girl (Emily Hope Holland) who hates her life and the macho older brother (Alex Daly) who is a closeted homosexual (wearing a see through mesh shirt the entire time). All are immediately recognizable and yet a great deal of stage time is given to introducing these characters as though we haven’t already immediately classified them.

The rest of the plot gets a bit confusing as the zombie chorus rotates between climbing over the audience, watching the characters while eating popcorn and drinking beer and generally dancing around exuberantly -- causing it to be quite unclear whether they are on the attack or just trying to entertain until one of the hapless victims wanders back onstage with bloodstains later on. It seems as though the central conceit is that zombies have unconditional love for each other, which would make the world a better place should humans not be around any longer.

Tricia Brouk's choreography of the zombies' shenanigans is far more polished and professional than the rest of the production, especially considering the lack of cohesion in the script and score. There are a few talented performers who strive to make their characters a bit more three dimensional (most notably goth girl Holland), but ultimately there seems to be a great deal of work to be done to make this production audience-ready with regards to streamlining and focus.

(The Zombies: A Musical plays at the Peter Jay Sharp Theater, 416 West 42nd Street, through July 13, 2014. Performances are Tuesdays and Wednesdays at 8PM; Thursdays through Saturdays at 7:30PM; and Sundays at 4PM. Tickets are $60-$75 and are available at ticketcentral.com or by calling 212-279-4200. For more show info visit thezombiesmusical.com.)