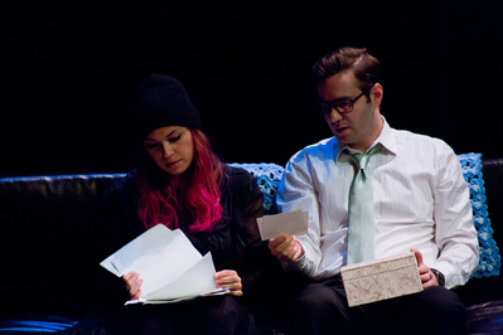 BOTTOM LINE: An excellent script, lived-in performances, and a unique use of the Jersey Shore as a setting make for a bittersweetly satisfying play.

Playwright Maggie Cino is a welcome presence at the Fringe. At 2012’s festival she won the Excellence Award in Playwrighting for Decompression, and she is back this year with the equally fine Warm Enough for Swimming. This deceptively simple play explores the emotional wear and tear of a brother and sister in mourning set amidst the wreckage of the 2008 financial crisis and the eroding beaches of the South Jersey shore.

Eddie (David J. Goldberg), an unemployed banker, has abruptly left his new bride Viva (Lindsey Carter) to be with his dying grandmother, the woman who raised him and his sister after their mother’s abrupt death. Upon arriving at her small, cluttered Jersey Shore home, Eddie is informed by his sister Bridget (Phoebe Silva) that “Gramma” had passed away in the night. As Eddie and Bridget strive to make sense of the estate, make funeral arrangements, or even just clean up the damn house, Viva and Phoebe’s Russian thug boyfriend (Derrick Peterson) arrive to complicate matters.

The moment that Bridget casually, awkwardly mentions Gramma’s death establishes Warm Enough For Spring’s bittersweet bite. It is a play that has a lot of sympathy for its characters but an unromantic view of life and death. The people that pass in and out of the messy shore house all strive to do the right thing, or their idea of the right thing, but are challenged by long-suppressed memories and current financial restraints. The Jersey shore is a wry, clever setting for this melancholy play. It is a place sweetened in the minds of many with warm nostalgia; a place haunted with sweet memories of sea foam spray and trampled boardwalks. The characters of Warm Enough for Swimming have much more complicated, almost toxic relationships with this setting, and their shore memories are made mostly of dead jellyfish, biting flies and unsympathetic winters.

As a person who has grown up with summers spent in Wildwood, Ocean City, Margate and Sea Isle City, I can attest that the shores of southern New Jersey have a very distinctive feel and aesthetic that Cino and director Fred Backus nail perfectly. Cino sets Warm Enough for Swimming in September, a time when the tourists start to leave and the shore becomes a quieter, emptier place. The production team beautifully weaves elements of a transitioning shore into the show’s fabric, particularly the distinctive calls of the laughing gulls (implemented by sound designer Daniel McKleinfeld). It is a production rich in specific detail with a very lived-in aesthetic.

The four person ensemble works beautifully together, and Cino gets a lot of great material out of different character pairings. There is also a light touch of farce in Backus’ staging that gives the play a sense of momentum, and the actors never let a beat drop. Silva’ s Bridget gets the biggest emotional work out, and the actress commits beautifully to the character’s complex inner life. Goldberg gives an empathetic performance as the conflicted Eddie. Carter and Peterson are also excellent as the oft-comic supporting characters, especially when Carter’s imperial WASP sensibilities are challenged by Peterson’s unapologetic sleaziness.

Warm Enough for Swimming is a beautiful, bracing play and one of the dramatic highlights of this year’s Fringe. The performance I attended (second in its five-show run) was sold out and word of mouth will no doubt make it one of the must-see shows of the festival. Get to it while you can.