Off Off Broadway, New Musical
Runs through 12.20.14
Dixon Place, 161A Chrystie Street 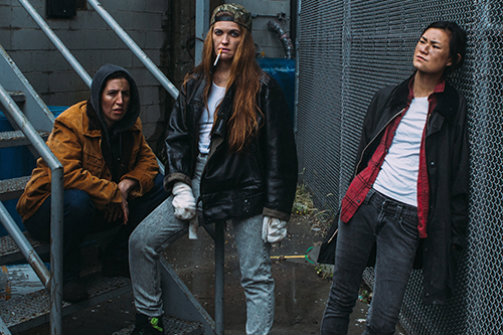 BOTTOM LINE: An experimental play with music about the sexual awakening of an Alaskan girl.

Among the whiteness of Nothing, a thought emerges, accompanied by the sound of a chorus and a small band. But not before Ellen Degeneres welcomes us. Or perhaps she is not Ellen Degeneres as we know her, but a demon. And the woman on the floor, the one who smiled at us as we entered Dixon Place, she is the mother of the thought, which is called Sedna. And as convoluted as all that may sound, rest assured it makes perfect sense in the world of Kristine Haruna Lee’s revolutionary coming-of-age musical play War Lesbian.

Sedna (Erin Markey), a young girl born from a ditzy mother called Womb (Jessica Almasy), struggles to find happiness in her Alaskan homeland. At the suggestion of Ellen (Kristine Haruna Lee) and Womb, Sedna is thrust into a sexual relationship with a dumb jock Gentleman Caller (Chris Tyler). Their sexual excursions are violent and strange yet Sedna becomes fascinated with various holes (both physical and metaphoric) and a sexual awakening begins. When Mitch (Derek Smith), a bear who claims to be her father and refers to Sedna as his son, arrives on the scene, Sedna is violently thrust into the Underworld with her fingers chopped off and turned into seals.

In the Underworld she meets a man named Tatqim (Andrew R. Butler), a pervert moon god genitalia-builder, whose mentoring shapes Sedna into a powerful leader of “the war inside.” Having matured into a proud fingerless woman, Sedna embarks on a rocky romantic relationship with Qualertetang (Cyndi Perczek). When things turn sour, she retreats to the comfort of a Beached Whale (Amir Wachterman) who plays Falstaff to Sedna’s Hal, telling her that not everybody has to fight. But Sedna is driven by a persistent longing to fulfill the holes which haunt her life.

Parts satire, parable and love story, this ambitious new work is given serious strength by Jordan Fein’s diamond-sharp direction and the incredibly talented cast and musicians. Kathryn Hathaway’s music so gracefully economically orchestrated by Solomon Hoffman adds a playful, gentle color to Sedna’s complex journey. But as bizarre as her journey may seem, Sedna’s struggles are no different than the struggles all queer adolescents face in a world where being different can have deadly consequences. During the final sections of the play, I related heavily to Sedna’s frustrations and her insatiable quest for something just beyond her reach. War Lesbian holds up a mirror to the wars raging inside all of us and that’s a breath of fresh air in these often troubling times.