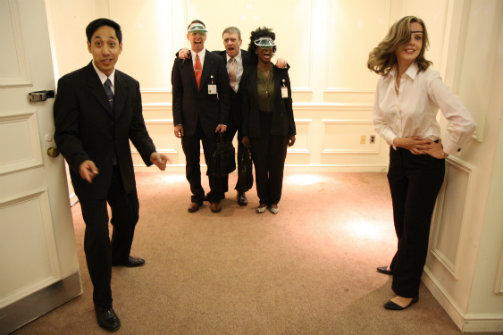 BOTTOM LINE: A wonderfully trendy if confusing immersive theater piece with some topical ideas on our worth in the midst of modern day capitalism.

Like nerdy glasses, kale salads, and ice bucket challenges, there is much to be said for trends that come and go. Here in the theater we’re in the immersive play tidal wave. Yes, Sleep No More, Here Lies Love, and Fuerza Bruta have ushered in, for better or worse, the era of the plays where seats are a thing of the past. Perhaps the history books will champion us but for now we must live it.

And love it. There is something awesomely thrilling about these plays that plunge you in to engage in something greater with the material -- the feeling that we are the Filipino people wanting to at once cheer on then rise up against the same cause, the fear and suspicion of the darkness lurking in every pore of Macbeth. In Trade Practices it is clear that we are meant to get sucked into the world of finance and shady corporate conglomerates that inevitably led to the collapse of our economy.

We are handed different, brightly colored tickets on our way in. Soon we discover that we have been divided into managers, communications directors, marketing directors, and blue collar workers. After a brief orientation to the inner workers of Tender Inc., a company that prints paper, we are flung onto the trading floor. TV monitors with scrawling CNN-type screens announce the date as 2000. This small paper-making company is looking to increase its profits and this play will take us through Tender Inc.’s journey towards a large, inhuman, public company and its (inevitable) decline.

I’m afraid that’s about where the synopsis can end as my report won’t be the same as yours. That whole different colored ticket thing? It doesn’t last for long. We are asked to swap tickets and experience a different story than we just saw. And now the trading begins. With some fake cash provided we buy whatever storyline we want to see the most. For me and my guest, we opted for a story we hadn’t yet seen. We took a risk! And often the risky endeavors pay off.

In the white collar workers story that we chose, we are hosted by the charismatic Franklin (Daniel Kublick.) He’s a wonderful storyteller to follow and guides us through Tender, Inc. with ease, humor, and a rightfully unsettling bad-boy charm. I feel like there’s harm in telling you too much of the plot from here. Mostly because I just don’t know it. Your experience will be singular. I will say that I jumped into a few stories (or I suppose bought my way into them) and I found myself feeling a bit blown in the wind. To me, I wanted to stick with the one plot and Kublick’s was compelling enough. When I went to visit the musical side of the story, led by Mary Rasmussen as Polly Tender and her boss (/husband?) Peter McCabe as Mr. Tender, I became confused and longing for the hole I left from Franklin’s play.

And this seems to be the fault in Trade Practices. It’s a bit reliant on the gimmick of the interactive nature of the piece while neglecting the story. In fact I gathered that there was some significant technical problem at the culmination of my story due to a malfunctioning robot (spoiler alert?). I was left not quite satiated with my experience and wishing to learn more with less time. Some careful editing and working out the kinks is certainly the next step for Trade Practices.

Now here’s some important bits. The official materials say that the play lasts two hours and someone should get on changing that because it’s pushing three. And let me tell you, when you have a ferry to catch and you’re on your feet in a Colonial house with an ever-rising temperature that hour matters. Yes, the play is on the stunningly beautiful Governor’s Island. And it’s certainly a commitment to get there. Be sure to consult the ferry schedules and if you’re coming from Brooklyn it is about a fifteen-minute walk from the dock (it’s right next to the dock on the Manhattan side.) Come a few hours early and have some lunch or tour this stunningly overlooked place. If you’re like me you’ll want to move into this oasis by journey’s end.

There is much excitement to be had in Trade Practices. Director Kristin Marting explains in her notes that the play is an attempt for her, as an artist not primarily concerned with finances, to gain some insight on this past decade's financial collapse. This hot, trendy new immersive theater craze is her and co-creator David Evans Morris’ creative answer. For me it leaves something to be desired, though I do want to conclude that practice may make perfect for Trade Practices. There’s a spark of something exciting here. Or maybe I just bought the wrong story.