Tosca and the Two Downstairs 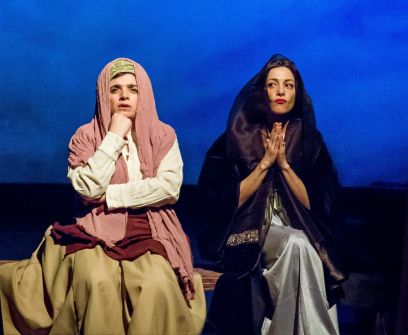 Laura Caparrotti and Marta Mondelli in Tosca and the Two Downstairs. Photo by Jonathon Slaff.

Tosca e le Altre Due, or Tosca and the Two Downstairs, is described as a dark comedy, but then what isn't in Italian high arts? Such a dark comedy, though, took an interesting leap in a side step direction. It’s not often that secondary characters get a voice: I always go to Tom Stoppard’s Rosencrantz & Guildenstern Are Dead as a model for this situation. Yet, Tosca doesn't use this device with recognized characters like the Hamlet duo, but two women who presumably take up the chorus -- mix that with genuine Italian language and the play is intriguing. Tosca is the fiery Puccini opera about requited and unrequited love for a titular opera star of the same name.

One of the lovers, Cavaradossi is an artist and revolutionary and as might be expected her other lover is the brutal Baron Scarpia who aims to torture the artist for political and personal reasons. The action takes place on the second floor of the Farnese Palace; below is where the two women, Emilia, the Palace’s landlady, and Iride, the police sergeant Sciarrone’s wife, meet. Beneath the ruckus and screams of torturous passion the women engage in somewhat menial conversations about status, class, and running away.

The play uses the original Tosca to satisfying degrees. It includes laughably cued tracks of Puccini’s music and timed screams of torture to keep the two stories together. Emilia, played by the director Laura Caparrotti, balances her natural landlord nosiness with deep reverence for the “feared” Baron Scarpia, through bouts of biased gossip in his defense. It is Iride, played by Marta Mondelli, who pushes discussion on Italian politics and rights to Emilia’s chagrin. The women’s many contrasts -- older/younger, high/low class -- underscores many of the same themes in Tosca, a woman one wants to be and the other hates for such contrast.

The play never creates its own music and the lack of it is pronounced. As much as this is Tosca through new lens, the promise of engaging a powerful opera may prove overpowering for a straight play; no matter how witty. Still, Tosca and the Two Downstairs provides a fun aesthetic that is rooted in reality -- from the hilarious Te Deum Mass scene when the two women discuss the Baron’s not-so-secret aria in the middle of prayer; Emilia audibly asks “Is the Baron talking to himself during Mass?” These pointed jabs at known action are the heart of the play and what make it worthwhile to see.

Should you already understand Puccini’s Tosca and can fill in the blanks, this is a fun show. Should you also be learning Italian (the use of superscripts enhances the feeling of an Italian Opera) the play will also delight. Another thing, the Dicapo Opera in the Upper East Side seems like a lavish secret: a beautifully intimate, yet sprawling cherry wood theater tucked away on Third Avenue and 76th Street. That alone should appease. As Tosca ends, the two downstairs are changed as well. It’s like the epic resolutions occurring above them seep into Emilia and Iride’s own next moves: an uncanny magic. It makes me wonder whose Tosca is seeping into my life.

(Tosca and the Two Downstairs plays at the Dicapo Opera, 184 East 76th Street through March 30, 2014. Performances are Thursdays through Saturdays at 8PM; Sundays at 2PM. Tickets are $35 general admission, and $20 for students and seniors. To purchase tickets visit smarttix.com or call 212-868-4444.)