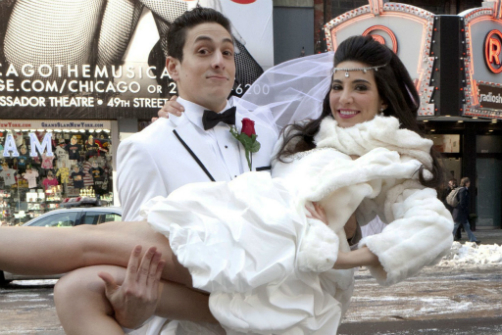 BOTTOM LINE: Go for the experience, not the production values.

It’s somewhat difficult to write a review for the revival of Tony N Tina’s Wedding (the original premiered in 1988 in Greenwich Village). It has no cast/creative team breakdown provided to its audience and 75 percent of the show occurs at Guy’s American Kitchen and Bar, where an energetic cast tries to get you to dance with them all evening. If you do attend, I’ll say this: have a drink or two or three beforehand, throw in the towel, participate, and go along for the ride with the cast. They really want you to have fun, and if you're the grouch in the corner who doesn't want to join in, you'll stand out even more.

The performance begins at Jacqueline Kennedy Onassis High School. The school is presented as mock church; it’s here we are introduced to the very Italian Tony, Tina and the wacky members of their families. For about 35 minutes, we watch numerous speeches from the bridal party, an inept priest and a timid nun. The cast then guides us through a chaotic Times Square to Guy’s restaurant for dinner, dessert and dancing. Be prepared for Italian stereotypes galore. Some material lands (the maid of honor Connie amusingly takes out a piece of gum before her speech; the brother-of-the-bride’s partner Rick hilariously takes photos as everyone speaks) while other bits scrape the bottom of the barrel (cheap jokes about the missionary position and food being “orgasmically” grown). All of the characters are loud, annoying and over-the-top… but that’s the point. The moment you arrive at JKO High School through the moment you leave Guy’s, you are a part of the action. You will be addressed. You will be brought up to dance. You will be asked to speak into the microphone. The cast talks with you as if you’re their old chums. If this is your thing, you will be in Heaven. If not, find a seat far far away.

Given that the tickets are so expensive, the food is a letdown. No options. You get pasta (with some vegetables in it) and a garden salad for dinner, and cake for dessert. Does it taste good? Yes. Worth the price of admission, just for the food? Absolutely not.

I recommend Tony n Tina's for a special occasion only -- say, a birthday or bachelorette party. Gathering a bunch of friends (plus drinking before and throughout) and really being prepared to dive into the shenanigans with this lively cast could make for a solid, entertaining evening. If you’re looking for a night of theatre featuring, say, a plot or substance, better sit this one out.

(Tony n Tina's Wedding plays at Jacqueline Kennedy Onassis High School, 120 West 46th Street, in an open run. Performances are Wednesdays through Fridays at 7PM; Saturdays at 2PM and 7PM; and Sundays at 3PM. Tickets are $125-175 and are available at TonyLovesTina.com or by calling 866-811-4111.)