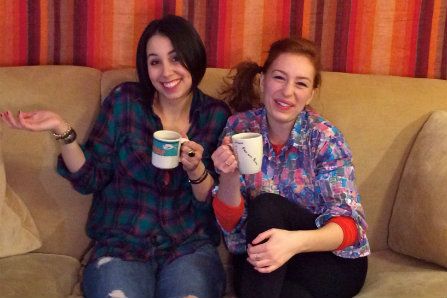 BOTTOM LINE: A goofy but spirited testament to the power of friendship as portrayed by a '90s-era Tina Fey and Amy Poehler.

SixTee Collective, a new theater company featured in this year’s Frigid New York Festival, consists of three “ladies who make plays about ladies who are funny.” What better way to honor this mission than an homage to the first female duo to conquer everything from Saturday Night Live’s “Weekend Update” to the Golden Globe Awards?

Yet Tina and Amy: Last Night in Paradise, a new piece by Boston University School of Theatre alumnae Maria Gilhooley, Antonia Lassar, and Nikki DiLoreto, isn’t just a love letter to Tina Fey and Amy Poehler. By placing their story in Chicago circa 1997, on the day Fey leaves for New York to start working at SNL, an embellished tribute to today’s most iconic women of comedy becomes so much more.

As Tina (Gilhooley) packs for her flight, Amy (Lassar) struggles to say goodbye to her pal and this carefree part of their lives together. In negotiating their professional aspirations and personal attachment, we see the kinds of tensions that still resonate for twenty-somethings today, and the kinds of conflicts that can only exist among the closest friends.

This is not to say the piece is overly serious in any way. Other than a curiously meta-theatrical moment that calls further attention to the career/friendship divide, Gilhooley and Lassar commit fully to their hapless characters, emphasizing Fey and Poehler’s quirky idolization of elastic-waist pants, cheesy snacks, and Hillary Clinton (“It’s pronounced ‘Rodham!’”). Silly and touching, Tina and Amy is a play for women in comedy, but also for anyone who ever wanted to take over the world without leaving their best friend behind.

(Tina and Amy: Last Night in Paradise played at Under St. Marks, 94 St Marks Place, through March 8, 2014. For more information about the Frigid Festival visit frigidnewyork.info.)