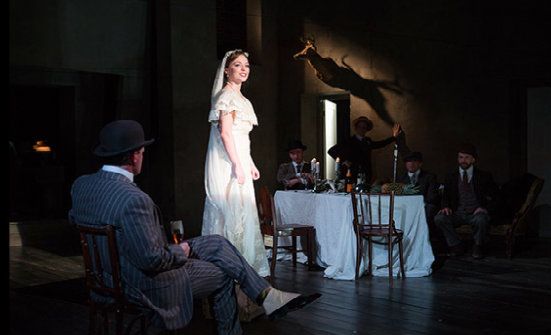 Michael Park and Laura Osnes in The Threepenny Opera. Photo by Kevin Garcia.
.

BOTTOM LINE:  A marginally stale, yet determined production of an important piece of theatrical history.

The Threepenny Opera is widely viewed as a socialist critique on a capitalist world. It centers around Macheath, a ruthless criminal, and the salty characters who surround him, as they all maneuver for advantage amid a profoundly corrupt society. That's pretty much the plot. Throw in an elderly miserly couple, a young bride, a love triangle, and some whores, and you've got yourself a show. I was beyond excited to see a fresh take on this gritty tale of lust, greed, and corruption. The poster for The Atlantic Theatre Company's recent revival even boasts a pale, somewhat sinister, yet still slightly quirky band hovering over a large naked torso complete with shadowy butt crack- leading me to think that I was going to see a new, edgy, exciting and maybe even little bit dirty production of a monumental piece of theatre that debuted in 1928. I was dead wrong. Instead, the audience is presented with a stagnant yet well performed production that perhaps, sans a little bit of random nudity, feels like it could have been performed in the same manner over 80 years ago when it debuted in Germany.

Not to get too political, but what better time to remount a piece about the starving class that is refered to as "The Beggar's Opera"? Yet I feel the material could have been made more relevant. Otherwise, why exactly is it being done? In the original production, Brecht and Weill's work got people talking. It was exciting and invigorating. This production is not. In fact, on the evening that I attended two people fell asleep during the first act in front of me. I'm not saying that it's that bad, but that did happen. The music and plot are challenging for a modern audience; the actors, for the most part, do an amazing job of working with the material, but I wanted so much more. The opening rendition of the über-famous "Ballad of Mack the Knife" felt so clinical and sounded like something that might be on in the background of a dentist's office; the show tepidly went along from there. While there were glimmers of brilliance that stood out amongst the banal landscape, for the most part it all just felt a little too safe. Where was the fire? Where was the passion? Or if we're not going in that direction, where was the comedy? I don't know. Maybe that was the point. If so, the production succeeded.

If you are a Weill purist, you will not be disappointed. The music is sung beautifully across the board, and the orchestrations are spot on. The conductor, Fred Lassen, who is featured upstage for most of the show, even had me chuckling a few times with his reactions to the goings-on of 19th century London. Laura Osnes (Polly Peachum) is utterly spectacular as she navigates the treacherous waters of "Barbara Song." Her vocals are effortless and her acting is really sublime. She captures the hopefulness, torture, angst, despair, and longing all battling to bubble over the surface, while maintaining a poised and refined dignity. I could listen to her sing the word "perpendicular" all night long. Sally Murphy (Jenny) slays both of her big numbers. Her rendition of "Pirate Jenny" is spot on and her second act number "Solomon Song" is a master class in acting. Dripping in black lace, Murphy oozes a restrained sexuality that is equal parts heart breaking and incredibly sexy.  Finally, Lilly Cooper, who was one of my favorite parts of the original Broadway company of Spring Awakening, brings powerhouse vocals and a naive sultriness to Lucy, the other object of Macheath's affections.

This production of The Threepenny Opera, while maybe not overly thrilling, is still sort of good.  It's pretty to look at; there's side lighting galore; and if you've never seen a production of the show, or don't know that much about it, it's definitely worth seeing. Plus, F. Murray Abraham is in it!  There also is an amazing dog who delivers several scene stealing performances. His name is Romeo, he's a giant bulldog, and he is amazing. I don't envy the actors who had to share the stage with him, and his triumphant appearance in the second act is pretty genius.

Is it all worth it in the end? Hard to say. What it lacks in action and excitement, it more than makes up for in determination. The actors and creative staff tried so hard to create the seedy underbelly of 19th century London, but it somehow fell a little flat. But what do I know? The run is selling like gangbusters and they've even extended through May 11th, so I guess they are doing something right. The Threepenny Opera might leave you wanting a little more, but the solid performances and beautiful music will, most likely, leave you satisfied enough.

(The Threepenny Opera plays at The Linda Gross Theatre, 336 West 20th Street, through May 11, 2014. Performances are Tuesdays at 7PM, Wednesdays at 2PM and 8PM, Thursdays and Fridays at 8PM, Saturdays at 2PM and 8PM, and Sundays at 2PM. There are added performances Monday May 5th and Sunday May 11th at 7PM, and no performances Saturday May 10th. Tickets are $75 and are available at AtlanticTheater.org, by calling OvationTix at 866.811.4111. There are also two tickets for each performance for 3 pennies each via a lottery. Visit the website for details.)