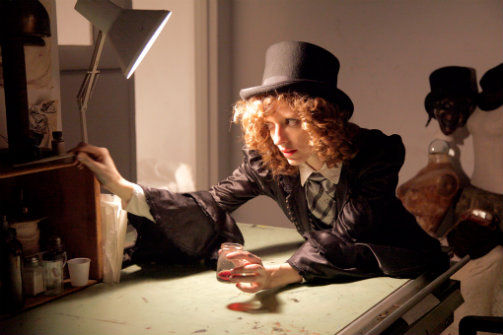 Elizabeth Carena in Then She Fell.

BOTTOM LINE: This beautifully evocative, Lewis Carroll-inspired dance theater piece explores the secrets trapped within the walls of an old hospital -- and within the minds of those who wander through.

It all begins in a dimly lit, turn-of-the-century waiting room, where, fittingly enough, you wait. A solemn nurse offers an elixir (red wine, which you’re welcome to accept or not) and informs you and the 12 to 14 other audience members of the house rules once the curious journey ahead of you begins: no speaking unless spoken to; no recording devices, including pen and paper. You’re also instructed not to open any room doors that are closed. But all cabinets, cupboards, and shelves along the way are open to exploration with the help of two skeleton keys provided for you. And in those hidden compartments you’ll find a rich, if mysterious array of old medical supplies, hospital records from 50 to 75 years ago, daguerreotypes, and reams of stationary—some filled with messages of longing, some hauntingly blank.

This is the prelude to the unusually intimate, yet expansive dance theater piece Then She Fell, the Bessie Award-winning site-specific experience from Third Rail Projects, which recently announced an extension through the end of this year. The venue in East Williamsburg, Brooklyn is a fictitious hospital ward created out of a former, century-old parochial school building not far from Third Rail’s company headquarters.

Like the long-running off Broadway hit Sleep No More, the visible specters you see before you are inspired by literary characters -- in this case, from Lewis Carroll’s Alice in Wonderland and Through the Looking-Glass. A word of warning: it definitely deepens the experience to go in with some knowledge of those books as well as of the vaguely troubling relationship between Carroll and Alice Liddell, the little girl who inspired him. A cabinet full of clocks stopped at the hour of 6 appears in a room in which you’re introduced to a somewhat demented figure in a top hat. In a smaller room, a tiny vial of medicinal powder that references a Tumtum tree sits on a shelf not far from a letter from the 1860s in which Alice Liddell’s mother curtly cuts off ties between her daughter and the author. Two of the performers who appear are glamorous, somewhat indomitable women, one all in red, the other in white. Others include a girl with long brown hair and a blue and white dress, along with a man in a suit vest and tie who does an erotic pas de deux with her in a stairwell.

Throughout the two-hour performance, you’re led around the three-story building, up and down stairs and along dark hallways, in groups, in pairs. Not infrequently you will find yourself in a room alone, exploring nooks and crannies, gazing into mirrors and windows, and finding your own thoughts and feelings creep into the mix. The next moment, you’re dealing one on one with a character from this disorienting world on the cusp of reality and dreams. It’s startlingly personal without ever feeling invasive.

The nine dancers in this piece rotate from a company of 25, many of whom have been with the production since its fall 2012 opening. Two of the best, on the evening I saw it, were Elizabeth Carena, who gives a sharp turn as the Hatter, and Haylee Nichele, one of two Alices. Nichele has great power in her movements and a face that is strikingly beautiful and full of enigma. Carena, who originated the role of the Hatter, has an antic, electrifying presence. An excellent dancer who is often quite literally crawling the walls, she is also sharp-witted. Some of her verbal banter is scripted nonsense, puzzling over such questions as, “Why is a Hatter mad? Why is a matter had?” Some of it is off-the-cuff. In one room, she coaxes two audience members into trying on different, ill-fitting hats. Suddenly, she perches on top of a cabinet and poses Carroll’s famous riddle, “Why is a raven like a writing desk?” When one audience member stammers out a suggestion that they’re, perhaps, both related to Edgar Allan Poe, she replies without missing a beat, “He was related to a desk? Huh. What a strange family.” Then she slithers down and finds the person a more suitable hat.

The masterminds behind Then She Fell are Third Rail’s co-artistic directors, Zach Morris, Tom Pearson, and Jennine Willett, who are the writers, directors, and choreographers of this intricately timed piece. They also co-designed the impressive set, the extraordinary and evocative array of props, and, with Karen Young, the gorgeous costumes. Two other stars of the production are Sean Hagerty, who created the dirge-like soundscape, and Kryssy Wright, whose breathtaking lighting design evokes a surreal world of shadows, seduction, and madness. This is Alice in the land of Freud.

When your journey is over and you walk out into the night air, past the darkly lit church next door, don’t be surprised if it takes a while to shake off the sense that you’re still in the performance. The show promises to “unearth clues to illuminate a shrouded history.” What’s unexpected is that those secrets turn out to be some of your own.

(Then She Fell, produced by Third Rail Projects, plays at the Kingsland Ward at St. Johns, 195 Maujer Street, Williamsburg, Brooklyn, through August 30, 2015. Performances are Tuesdays through Sundays at 7:30PM and 10:30PM. Tickets are $95–$200 and are available by calling 718.374.5196 or by visiting artful.ly/thirdrailprojects.)