The Skype Show or See You in August

Off Off Broadway, New Play
Runs through 2.8.14
The Brick Theater, 579 Metropolitan Avenue, Brooklyn 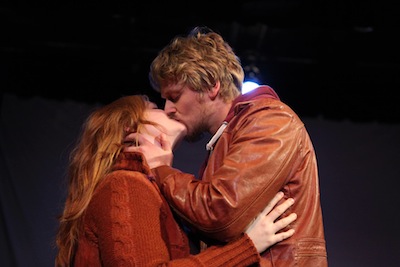 Jody Christopherson and Michael de Roos in THE SKYPE SHOW OR SEE YOU IN AUGUST.

Absence may make the heart grow fonder, but as anyone who has ever tried to navigate a relationship between parties separated by thousands of miles will tell you, they’re never easy. But people often try to make them work — and they sometimes succeed.

This is the bare bones outline of The Skype Show, Jody Christopherson and Michael de Roos’ intimate and poignant personal story. The pair had, for several years, worked together as music partners, and later became lovers, living together in a Crown Heights, Brooklyn apartment that served as both a rehearsal space and home. Then, late in 2012, Michael revealed that his student Visa was about to expire. Worse, he confides, in a matter of days he will have to return to his native Holland. Jody is predictably devastated, angry that he waited so long to spring this on her, and sad that their up-and-coming band, Greencard Wedding, may end up a thing of the past. As Michael prepares to leave, questions mount. Can they stay together as a couple, at the same time developing new music? Should they even try?

The answer, of course, is a resounding yes.

Thanks to Skype, the pair talks every few days, singing to one another, catching up, and flirting. It’s fun, at least until Jody realizes that Michael has done virtually nothing to find work so that he can return to Brooklyn. Even more disappointing, they seem unable to make music. So what to do? For a while, Jody nags, berating her mate for his cluelessness and lack of drive. His responses are projected onto a white screen at the back of the stage and we see their interactions in what feels like real time. The date and hour of each encounter — noting the six hour time difference — are part of each projection. Throughout the play, flashbacks are interspersed with the calls, and we see the couple — live on stage, playing themselves — in the heady days of their courtship.

We also see Jody trying to learn to play guitar — Michael had been the instrumentalist and beatboxer and Jody had been the lead vocalist of their fledgling duo — so that she can pursue a solo career. The instruction videos she utilizes feature the zany Unka Dave (David Anzuelo) in a how-to series called "Guitar for Absolute Fucking Beginners," and the practice interludes give the play some humor.

As the performance unfolds, however, things turn serious as reference is made to specific Visas that are available to artists and performers. While this sounds like an ideal way to get Michael back to the US of A, careful scrutiny of the requirements makes it clear to Jody and Michael — and subsequently to the audience — that this is an option available only to the well-heeled. Instead of pursuing this avenue, Michael manages to find an Amsterdam-based agent, the comely Claire (Erika Robel), who adds a layer of intrigue to the production. Is Claire really going to help Michael’s career, or are her promises merely a hook to lure him into her bed?

That Michael and Jody perform The Skype Show together is your answer. At the same time, how he got back to Brooklyn remains one of the show’s mysteries. For the most part, the play works well, and is a charming back-and-forth that zooms in on the problems endemic to maintaining a long-distance romance. At the same time, Michael’s presence raises questions that could and should have been answered.

Still, The Skype Show is entertaining, and the music is lovely and well performed. A hit when it was initially presented at the 2013 NY International Fringe Festival, these talented singers-songwriters-actors have crafted a touching love story. One only hopes that their partnership can continue for the long haul.

(The Skype Show or See You in August plays at the Brick Theater, 579 Metropolitan Avenue, Brooklyn, through February 8, 2014. Remaining performances are February 5th through 8th at 7PM. Tickets are $18 and are available at bricktheater.com or by calling 212-352-3101.)