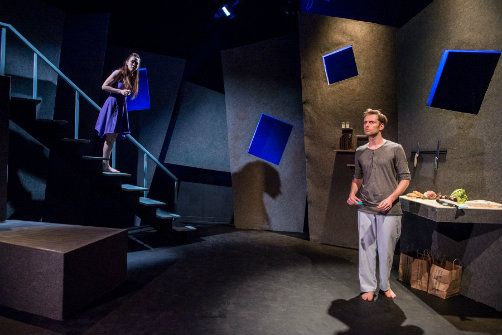 BOTTOM LINE: An intense physical and poetic exploration of domestic violence, both darkly funny and disturbing.

Stockholm is a city synonymous with peace and calm in the modern world. It's a place that brings about white sterile imagery of Ikea furniture and clean streets. It's where the Nobel Peace Prize is awarded. It is also reminiscent of "Stockholm Syndrome," when hostages begin to empathize with their captors. In Bryony Lavery's darkly exhilarating play Stockholm, both references co-exist in a domestic cycle of love, violence and sex. As stylistically directed by Nick Flint and choreographed by Natalie Lomonte, the New York City premiere of this 2007 British play is a thrilling and disturbing medley of poetry and dance.

Todd (Richard Saudek) and Kali (Christina Bennett Lind) are the couple you meet at a party who are just a little too perfect. Their happiness and endearment for each other are almost rehearsed and over the top. This is how Todd enters the play, carrying a bag of fresh groceries on the afternoon of his birthday. Lavery craftily has her characters step in and out of themselves playing the role of narrator -- however, Flint smartly directs this interpretation as simply two versions of the same people. We learn through this form of narration that Todd and Kali are about to take a trip to Stockholm. "It's going to be magic," Todd declares with an off-kilter grin.

Lavery has become known for her ability to venture into dark worlds with a poetic sensibility allowing the audience to look without the judgement of a harsh realistic portrayal. Her 1998 play Frozen was a critical and Tony Award success on Broadway. In Stockholm, she takes us into the early days of a toxic relationship imprisoned in a cycle of domestic violence.

Unlike most depictions of domestic violence, Todd and Kali are equally guilty and troubled in their addiction to the cycle of violence. While Kali's absurd jealousies boil over and initiate the battles, it's Todd's attraction to the abuse that perpetuates the relationship. They've even come up with a cute name for her issues of allowing Todd's past relationships to infuriate her as "retro-jealousy." Todd's main role in the blood and bruise-inducing fights is to "parry" her every move, trying to control and never strike back. After the violence there is a complete decline in Kali to a state of pathetic guilt and regret for her actions. His role in the cycle is more psychological as he explains, "There is simply no way of telling anyone outside of this how attractive it is -- true remorse."

Lavery places clues to their behavior all over the script without ever fully filling in the background information. Todd receives calls from his mother checking in on him, which he never returns, that completely shut him down. Was there another kind of abuse in his past that he can't escape as an adult? Kali fights to maintain her composure for the most part until vodka is introduced into her system.

While none of this sounds fun to watch, it is remarkably entertaining and even funny. This is largely due to Lavery's structure of the play which she calls a "text and movement piece." While Lind and Saudek are admirable actors vocally on stage, it is their dancing and movement capabilities that allow these roles to become something more than tragic self-destructive people. Lomonte's choreography is like a grittier West Side Story fight scene and the sex is an acrobatic entanglement of limbs akin to Pilobolus.

The text is free-verse poetry, even in dialogue. It is made more immediate though by the sharpness of the words. The staccato bluntness matches the primal thought process of Kali such as, "Teeth. Bite. Eat. Fucking sink into that lying unreliable fucking flesh he's wearing..." Lavery draws allusions to modern warfare and similar syndromes on a global scale as well. She foreshadows the consequences of this hostile co-dependency both in the children of domestic violence as well as global conflict.

In this production, produced by One Year Lease Theater Company, we get a decidedly American setting that doesn't always transpose perfectly with Lavery's British text with references to Finn Air and using the "mobile." Also, the idea of a short trip to Stockholm is depicted as a more casual idea than it would be for an American couple to plan the same excursion. Still, the themes and conventions are entirely universal.

There may be a slightly more eloquent production of this challenging play to be had. I do wonder about the expressionistic set design by James Dardenne in that it may tip its hat to the style of the piece more than need be. I'd be interested in the juxtaposition of a meticulously designed home on stage coinciding with the hyper-theatrical dialogue and movement. Also, at times Flint's actors may push the extremities more than necessary leaving opportunity for subtle connections undiscovered. These are mostly petty squabbles in a production that on the whole is mostly remarkable in its ferocity, stamina, and beautiful (if not scary) physical exploration of some darker areas of humanity.