Off Off Broadway, New Sketch Comedy
Runs through 8.16.14
The Celebration of Whimsy, 21 Clinton Street 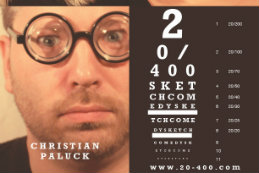 BOTTOM LINE: This offering of comedic sketches is often laugh out loud funny and plays on gross-out humor and pop culture references.

The inspiration for 20/400–Sketchy as F*ck originated via the web series 20/400 (20-400.com) put on by sketch comedians Lauren Olson, Jana Schmieding, and Christian Paluck, all of whom regularly perform in sketch and improv shows at The Magnet Theater in Manhattan. This Fringe production of 20/400–Sketchy as F*ck shows the trio performing some of the characters they originated during their web series epsidoes. The sketches differ somewhat from the style you may be familiar with via such shows as Saturday Night Live as not all of the sketches have set beginnings and conclusions.

The show opens with a rousing theme song consisting of mostly the show’s title while Schmieding and Olson riff on such topics as their cat and their period. In the first skit Olson plays a woman desperate for attention at a bar, informing her less than ideal admirer that if he flirts with her and kisses her it just might raise her self esteem enough for her to pursue a man who is actually suitable for her. In another Paluck plays an inconsiderate video game playing jerk who expects his love interest, played by Schmieding, to trudge through snow while on crutches and wearing a neck brace and donning a cat costume just to fill his booty-centered sexual whims.

Some of the skits require a level of awareness in regards to pop culture that leads to not all of the audience members being in on the joke (but which provoked much laughter from those in the know), including a parody of the Netflix show "House of Cards" and a spot on parody of Sia’s “Chandelier” video in which Paluck dances in a body suit and blonde wig.

Some skits are more just about weird situations than any kind of orchestrated jokes, such as a short number in which Jana smashes a dangling giant breast piñata, replete with a hot pink nipple and areola (Since they have to smash a new one every night, I have to wonder where they get them from. Does the cast assemble a new one for every show?) In another, Olson does a provocative booty shaking dance to the song “Bottoms Up” while donning a revealing swimsuit with granny panties underneath, a strange wig, and large glasses.

The trio also pepper their show with short videos, some of which correspond to skits and others which are fake ads including an ad for a nipple tour of Italy, identifying which cities in Italy feature which types of nipples (breasts seem to be a reoccurring theme in this show). In another, Paluck soaks himself in a bag of Elk urine to see if it will attract women in a bar.

All three performers are quite skilled at physical comedy, and they play their roles with utter sincerity and sometimes nuance, resisting the urge to ham it up and over-act. This style often increases the humor of the wackier situations. Olson is particularly skilled at believably portraying some of the show’s more bizarre characters. While not all of the skits here will appeal to everyone in the audience, chances are that there is plenty here that will have you doubled over in laughter.