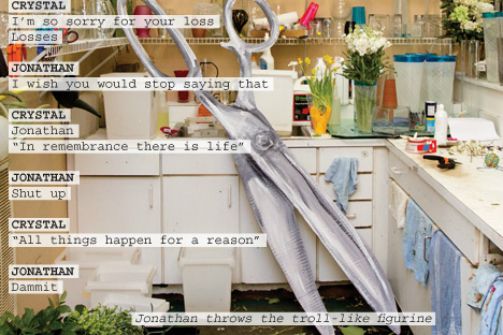 BOTTOM LINE: A quirky comedy about why we live even though we’re eventually just going to die.

What if Little Shop of Horrors was a lyrical play about the inevitability of death and the existential limitations of life by default? What if instead of a homicidal plant, Audrey II was an omnipresent threat of impending demise?

Though actually not at all similar to Little Shop of Horrors (thanks for indulging me though), there is something worth noting about an urban flower shop -- mundane yet hopeful -- and this is the heart of 16 Words or Less. What transpires in this play is a lovely metaphorical adventure through the life of the store's employee Crystal (Crystal Finn) coming to terms with growth and change in a world full of inevitable death.

Surrounding Crystal are customers, acquaintances, doctors, and others who drift in and out of her day. Mostly via the phone on the flower shop desk, Crystal interacts with these people in various ways. Sometimes it's business -- taking an order for a flower delivery; sometimes it's personal -- talking to doctors about a recent breast cancer diagnosis. Six actors (Neal Huff, Clayton Dean Smith, Caitlin O’Connell, Jessica Rothe, Donnetta Lavinia Grays, and Mia Katigbak) nimbly portray various characters in Crystal’s life, often assembling into a telephonic Greek chorus of sorts.

Rhythm is a big part of this play, and between Peggy Stafford's expressive words and Portia Krieger's perfectly timed direction, the production maintains a heartbeat that ticks steadily on. Stafford’s use of the absurd also contributes to this theatricalized world. Krieger and cast place a thoughtful sincerity on the silly life situations that remind us that we really shouldn’t take it all too seriously. From a bone-broth diet that generates hair growth, to a grandmother getting knocked up, to an on-the-spot mastectomy, this world remains unpredictable.

Daniel Zimmerman's clean set design shows the flower shop center stage, with three of the four walls opened to allow seamless movement in and out of the store. Along each side wall are corded telephones, used consistently as “the outside world” with which Crystal conducts business.

“16 words or less” refers to the amount of words the flower shop allows customers to include in written cards, and just how hard it is to fully express a depth of feeling within that limitation. Stafford uses repetition to create a symphonic landscape of the aphorisms we hear on repeat when something bad happens in our lives. “I’m sorry for your loss” is uttered many times throughout the play. The number 16 transforms from words to years to days left to live.

As Crystal observes others’ life changes, noting the transformations occurring all around her, she finds the strength within herself to not just settle for the status quo. At first merely willing to cut her long hair as a donation to the cancer center, by the play’s end Crystal has begun a relationship and found better employment. We are optimistically reminded that the end isn’t here until it is.