By Jez Butterworth; Directed by Ian Rickson
Produced by the Royal Court Theatre 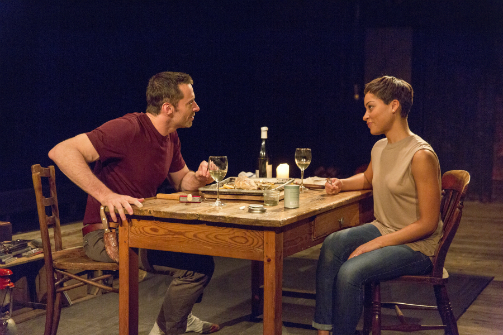 Hugh Jackman and Cush Jumbo in The River. Photo by Richard Termine.

BOTTOM LINE: Hugh Jackman shines in a lyrical new play by one of England’s most acclaimed playwrights.

So there’s this man who brings a relatively new girlfriend to a remote cabin at night in the English countryside. If that sounds like the makings of a thriller, the playwright Jez Butterworth is probably okay with that. And if you know some of his better-known works, like Mojo, his gangster-packed play and film from the 1990s, or the Tony-nominated Jerusalem from several seasons back, you may well expect unsettling plot twists in this new drama, The River, which stars the endlessly talented Hugh Jackman.

From the moment you first see the subtly lit, dark wood of the cabin interior and hear The Woman (played by Cush Jumbo) as she enters, singing a ballad version of a haunting poem by Yeats, you’ll probably feel that something sinister is afoot. But whether The River is a thriller, a mythical allegory, a thoughtful study of the elusiveness of love, or an enigmatic combination of all that and more is not necessarily going to be resolved at the end. And it’s a fair bet that Butterworth is fine with that, too.

What does become clear is that there’s a cycle of some kind going on with the character played by Jackman, in turns funny and achingly sad. I don’t want to say much more, except that another character does appear, called The Other Woman (played by Laura Donnelly). But who is she? And, for that matter, when is she? These are questions that you will probably be discussing as you leave the theater.

Another aspect of this play that is clear is that it’s written with an uncommonly delicate, poetic touch. When Jackman’s character recalls a boyhood memory of the first time he caught -- and lost -- a fish, it is a lyrically symbolic and poignant description of the moment when he first encountered both loss and the awesome generational forces of nature. In lesser hands, such flights of eloquence would be overly precious. But Butterworth’s language is beautiful and grounded in his storytelling. He also isn’t afraid to call on higher powers, such as the English poet Ted Hughes, whose “After Moonless Midnight,” which is recited at one point, was part of a larger collection in the 1980s titled River. Hughes’s controversial and potentially menacing relationship with Sylvia Plath is fleetingly, but rather meaningfully, alluded to here as well.

Ian Rickson, who premiered this play at London’s Royal Court, directs a strong cast and creative team for the Broadway run. He’s brought his original designers over, including the single-named Ultz on set and costume, Charles Balfour on lighting, Ian Dickinson on sound, and Stephen Warbeck’s original music. Together, these artists have figured out how to create a deceptively simple space -- in look and sound -- that nevertheless has many secrets tucked away. And they have done this using the often-difficult thrust staging of Circle in the Square.

Another holdover from the London production is Donnelly, who is a touch too stagey in her pronunciations but who brings out the earthy humor of her character. Jumbo has a dynamic presence as the first woman. An up-and-coming writer and actor from the UK, it’s a fair bet that we’ll be hearing more from her. And Jackman brings an enigmatic subtlety that can fool you into thinking that he isn’t working very hard, that he’s not making enough choices as an actor. And then you realize that it’s just the right approach for this inscrutable man for whom still waters run deep.