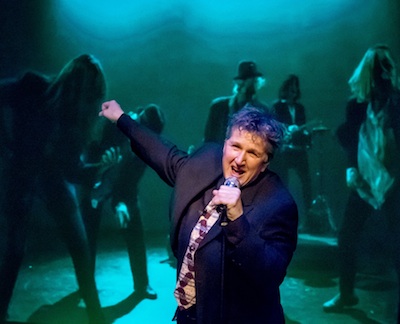 Peggy Shaw in RUFF. Photo by Lee Wexler/Images for Innovation.

BOTTOM LINE: The great Peggy Shaw returns with an acclaimed solo show that celebrates creativity in the midst of aging and infirmity.

Let’s make one thing perfectly clear: Peggy Shaw is not merely one of the pillars of downtown theater, as a veteran of landmark companies like Split Britches, Spiderwoman Theatre, Hot Peaches, and the WOW Café. She’s also one of the hippest dudes you’ll ever meet. She’s the Leonard Cohen of Off Off Broadway, and not just because she sings along to the rock legend’s “I’m Your Man” towards the end of her poignant new show Ruff at La MaMa’s First Floor Theatre. Like Cohen, Shaw has a Dionysian knack for casting seductive spells over her fans, be they female, male, straight, gay, or anywhere in between.

You could even say that Shaw, a butch-queer grandmother entering her 70s who has spent her performing career exploring the fluid boundaries of gender and age, is the patron saint of the “in between.” So after she suffered a stroke three years ago this month, which erased a section of her archival memory, it was perhaps inevitable that she would find in the experience another journey between spaces.

With longtime collaborator Lois Weaver as her director and co-writer, Shaw’s descriptions of that journey range from the poetic —“An icicle of death hit the ocean floor of my brain,” she explains — to the wry and comic, like a hilariously unhelpful public service announcement on the warning signs that you’ve had a stroke.

Ruff is a deeply personal piece, haunted by a brief, powerful home movie clip of Shaw as a 13-year-old at her sister’s wedding, a girl from working-class Boston gazing at us across the years from a world that, as Shaw tells us, was not yet ready for her. It’s tempting to feel overwhelmingly sad watching this vibrant woman now grasping for words, especially if you have seen such agile, mesmerizing solo shows as Menopausal Gentleman or the Split Britches classic Dress Suits for Hire. But Shaw doesn’t allow you to dwell in those feelings. She encourages you to laugh with her, celebrate the role models who inspired her — everyone from Marlon Brando to Ethyl Eichelberger — and to sing along to the rhythms and melodies that helped her reclaim most of her speech over the last few years. (The title of the show is a pun on the three-stroke ruff, a rudimentary drum phrase learned by everyone learning or relearning basic percussion.)

Shaw interacts with a pre-taped video of a backup band consisting of a number of her longtime colleagues like Vivian Stoll, who also provides music and sound design for Ruff, and Ellie Covan, Executive Director of Dixon Place, where the work premiered last year. And together, they search for a groove. It’s an imperfect process but that’s largely by design. Shaw has long championed and perfected an aesthetic of imperfection that, with this production, fits with heart-rending beauty into a narrative about the ragged reconstruction of a broken mind.

A free exhibit several blocks away at La MaMa La Galleria offers a striking extension to this journey. Cheekily titled "Desperate Archives," the show is a retrospective in miniature of Split Britches’ three-decade career, and it does with production props, sketch designs, videos, and personal items what Ruff does with memory narrative — combining random artifacts into beautiful works of art.