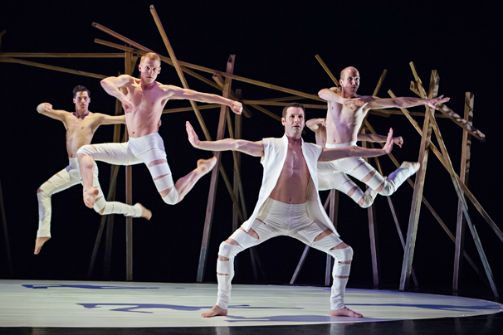 BOTTOM LINE: Under the direction of Pascal Rioult, a mesmerizing modern dance company brings its grace and athleticism to the Joyce for a unique limited engagement.

Before founding his namesake company in 1994, Pascal Rioult was a track and field athlete in his native France. As a student of modern dance in the US under May O’Donnell, he earned an invitation to become part of Martha Graham’s Dance Company. His associate artistic director, Joyce Herring, also studied under Graham. While Rioult has been inspired and influenced by Graham, he has his own singular vision, incorporating classical elements with the modern. As he notes in the program, “art, like life is not born in a void; everything evolves and transforms.”

For their week-long residence, the large and talented troupe will be performing two programs. I saw Program A: Martha, May and Me, so named because it’s a tribute to the teachers who shaped his illustrious career. With the dance, Rioult intertwines a video component created by TAG Creative.

The first work, Suspension (1943), was choreographed by O’Donnell. Rioult describes it as “absolutely abstract.” It doesn’t present a story; it’s simply about the fluidity of the movement between the seven dancers, led by Sara E. Seger. It feels very modern even though it is from nearly three quarters of a century ago. Rioult follows that with one of his own, Black Diamond (2003). It’s a duet between dancers Charis Haines and Jane Sato set to Igor Stravinsky’s “Duo Concertant.” Similarly, Black Diamond doesn’t employ a narrative. In Rioult’s use of shadows and lighting the dancers even more than in the first piece seemed to achieve true suspension.

The second half of the evening opens with Martha Graham’s El Penitente (1940). It was originally performed by Graham, Erick Hawkins and Merce Cunningham. Later the roles were taken on by Rioult, Herring and Kenneth Topping. Graham was particularly intrigued by the Southwest and a sect of Penitents who performed purification through extreme penance. El Penitente gets its cues from these rituals and the Bible, but is presented as a play within a play with the dancers taking on the roles of the characters and performing familiar moments from the Bible. They act out scenes of flagellation, seduction, repentance, crucifixion and salvation.

I was most drawn to this piece because it contains a plot of sorts and the dancers -- Haines, Jere Hunt and Michael S. Phillips -- come across as connecting more with each other. This is especially true during the seduction between Haines (as Mary Magdalen with her flowing dress and hair ribbon) and Hunt (as the Penitent), where they play with and off one another, complete with a large prop apple. Visually, with the props, costumes and choreography, I found El Penitente to be the most engaging part of the night.

Rioult closes the show with nine excerpts from his Views of the Fleeting World (2008). He was captivated and moved by the ancient woodblock prints of master Japanese artist Utagawa Hiroshige, as well as Bach’s “The Art of the Fugue,” which accompanies the work. Like Graham with her window into the world of the Southwestern sect, Rioult creates a “choreographic exploration” of another culture as he touches on the fleeting nature of the life cycle. It’s performed by the full company or nearly so and also includes some skilled junior members who join in at the end.

For dance aficionados, you would be hard pressed to find a more lovingly crafted celebration of the form. For those who are less interested in the abstract performances, the choreography and dancers of Rioult are unquestionably beautiful.