The Pig, Or Václav Havel's Hunt for a Pig 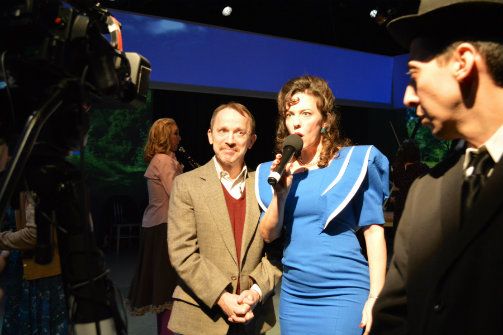 BOTTOM LINE: A near perfect patchwork of great Czech theatre, music, and food.

I’m trying to write a review for Untitled Theater Company #61’s production of The Pig, Or Václav Havel’s Hunt for A Pig with something more eloquent and informative than “OMG SO GOOD ALSO THERE IS FOOD!” I will do my best to convey my enthusiasm, but this show is one of the most enveloping, joyful productions of anything I have ever seen, which is a strange thing to say about a thinly-veiled critique of Soviet policies. Also, there is food.

In 1987 a short dialogue written by iconic Czech playwright (and later president of Czechoslovakia) Václav Havel was published in a “samizdat,” or underground newspaper. The short work illustrated the true story of Havel’s star-crossed journey to secure a pig to serve his friends at a traditional feast. In 2010, director Vladimir Morávek expanded the text into a one-act play, interspersing Havel’s misadventures with excerpts from The Bartered Bride, the famed comic opera by Bedřich Smetana.

Playwright Edward Einhorn, who was invited to see the premiere of The Pig at a festival in Brno, immediately set to work translating the piece for an American production. Einhorn worked with a native Czech speaker to capture the meaning and rhythms of Havel’s prose while adding lines to better convey the cultural references throughout. “In the end,” writes Einhorn in the program notes, “this production takes the Brno script and augments it with our own creative imaginings, just as Havel’s original was augmented by Morávek.” Einhorn also notes that he does not consider this work to be a play or an operetta, but a “collage”: collaboration across centuries to create a unified event.

And what an event! The Pig at times feels more like a celebration than a night at the theater. There is so much to be enjoyed in The Pig, starting with the food. I mentioned there was food, right? Those that preorder tickets have the option of purchasing a delicious meal from Korzo, which has been named one of New York’s best Slovak restaurants by The Village Voice. Those lucky people get to enjoy a delicious entrée wrapped in Langos (rising dough flatbread) at the top of the show. If you have no moral, dietary, or religious objections to consuming pig meat, I would advise you to go for the pork option. The meat is flavorful and tender and the dish itself is thematically appropriate. The vegetarian option is also tasty, though.

After the meal has worked its magic it is easy to let the rest of the evening wash over you. Despite the heady subtext, The Pig revels in its absurdist comedy and uses the mechanics of 3LD to magnificent effect. As Havel (played by Robert Honeywell) shares his story with a perky American reporter (Katherine Boynton), the ensemble bounds about the stage, singing and playing songs from The Bartered Bride. The music resonates beautifully in 3LD’s wrap-around environment. Smetana’s buoyant score gives the evening a festive flavor that undercuts Havel’s journey nicely.

The ensemble is phenomenal, injecting the show with boundless energy. They sing, they dance, and they wield musical instruments like Robin Hood wielded a bow and arrow. Though uniformly great, Moira Stone and Terrence Stone, as an increasingly tense comic opera couple, Christopher Yustin as a shady pig-dealer, and Jenny Lee Mitchell in a brief, brassy turn as The Tapmaster’s Wife, are stand-outs. Honestly, I could write an entire dissertation paper on the contributions of each cast member, they’re all so good. Special mention has to go to Honeywell, who grounds the show by investing Havel with unflappable integrity.

What makes The Pig shine more than anything else, more than the food, more than the comedy, more than the music, is love. You can feel in this show the great love that Havel had for his friends, his country, and his art as well as the love he inspired in others. That love is infectious and left me feeling fuller than any delicious Langos wrap ever could.

(The Pig, Or Václav Havel’s Hunt for A Pig plays at 3LD Art & Technology Center, 80 Greenwich Street, now through March 29, 2014. Performances are Thursdays through Saturdays at 8PM and Sundays at 7PM. Tickets are $20 or $45 with dinner served and are available at ovationtix.com or by calling 866.811.4111.)