Student Rush tickets are FREE (!) when seats are available

Created and Directed by Robin Frohardt 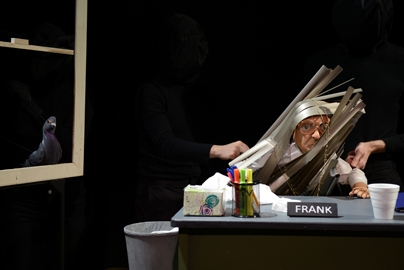 It's with great fortune that the delightful puppet play The Pigeoning makes its return to HERE after a very successful run this past winter. Heavy on ingenuity and general artistic merriment, this production and its set of savvy puppeteers remind the audience that sometimes more can be said with very few words at all. Below is Jack Smart's December 2013 review from The Pigeoning's initial run. Check out the show through August 16th, Tuesdays through Thursdays at 7PM; Fridays at 7PM and 10:30PM; and Saturdays at 2PM and 7PM. Purchase tickets and get more information at here.org.

BOTTOM LINE: A whimsical tale about security and a testament to the power of puppetry.

HERE’s Dream Music Puppetry Program is one of many contemporary theater groups riding the trend of puppetry in theater. This ancient form of performance can bring live storytelling to wildly imaginative places, and artists legitimize it onstage beyond the reach of the Muppets. Robin Frohardt, the creator and director of HERE’s The Pigeoning, cut her teeth in the underground circus and vaudeville scene of San Francisco. Now a HERE Arts Resident, Frohardt is an interdisciplinary thespian with the vision and talent necessary to take puppetry to the next level.

As a piece of theater, The Pigeoning is chock-full of vision and talent. Originally conceived in 2006 with The Apocalypse Puppet Theater in Oakland, it provides an articulate, amusing glimpse into the life of Frank, a harried-looking curmudgeon about two feet tall. The puppet and much of his surroundings are operated by Daniel Burnam, Nick Lehane, Lille Jayne, Andy Manjuck and Rowan Magee. Working seamlessly together, these mostly-invisible puppeteers capture both mundane minutiae and fantastical anomalies. Frank struggles with obsessive compulsive disorder, which leads to a growing connection to both his Office Safety Manual, a preposterous tome documenting emergency procedures in an office environment, and a handful of alarming pigeons. Reality sinks slowly into absurdity, and Frohardt somehow manages to connect the dots between OCD and the apocalypse while keeping the story’s whimsical tone afloat.

With only intricate movements and minor vocal cues, the puppeteers let us share Frank's tiniest frustrations. He conveys an almost Beckettian level of despair through his many pratfalls and double takes. Convinced of a vast pigeon conspiracy, his obsession takes him further and further into the deep end — quite literally. A sequence involving pizza boxes as swimming stingrays is one of this production's crowning moments. The puppetry is charming in part because it’s cartoonish, simplified. But it occasionally achieves magic, particularly during dream sequences when Frohardt's imagination — and the puppet — truly take wing.

Freddi Price provides original music composition that perfectly complements Frank’s fanciful unraveling. Its electronic elements parallel his mundane bureaucracy (we never learn what this character actually works on sitting at his desk) while circus-like tuba sounds emphasize the more farcical sequences. The audience is utterly captivated by these lighthearted vignettes. When, for example, Frank attempts to close his window shades all the way in order to block a pigeon’s incessant tapping, it becomes a ridiculously Sisyphean endeavor.

The story ends on a similarly quirky note, which left me feeling a bit surprised at the lack of exploration into the nuances of security and obsessive compulsive behavior. We often witness Frank’s melancholy, as his internal struggle for order amidst chaos projects evermore desperately onto a crumbling world, but a visual punchline is never far behind. By ending the play as charmingly as it began, The Pigeoning is in danger of belittling obsessive compulsives and erasing the dark in its dark comedy. Its conclusion is by no means unsatisfying though, as the puppeteers rejoice in all the tricks and wonders that this form of storytelling makes possible.