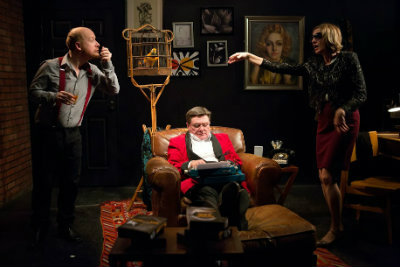 I am often amazed at how theater seems to be tucked into every corner of New York City. There are theaters in bars, coffee shops, old garages, office buildings, construction sites and your friend Steve’s living room. Rats, roaches and theater all share the same level of ubiquity in this city, and one of them is actually welcomed.

Private Disclosures is currently appearing at The Bridge Theater in Shetler Studios on the 12th floor of a building on West 54th Street. I’m at Shetler often for auditions and rehearsals, but I have never seen a show at its intimate little performance space. I’m glad I did.Private Disclosures is a show that will be enjoyed by fans of old New York, the 1960s, Truman Capote and/or plays where actors change character by putting on a jacket.

Playwright J.B. Heaps’ one-act dramedy is set in mid-century Manhattan on the 40th birthday of famed (fictional) gossip columnist Preston Sherwood (Einar Gunn). The misanthropic but urbane Sherwood playfully teases would-be attendees of his birthday party and those interested in his rumored upcoming sordid tell-all book. However, an ominous phone call suggests that there are those who would rather the book not be published. Jamie Heinlein and Robert K. Benson fill out the assorted characters in Sherwood’s world.A cursing parrot puppet rounds out the cast.

Heaps based the play around the mystery of Answered Prayers, Truman Capote’s unfinished novel. Capote promised that the book would reveal the sordid sex lives of Manhattan’s social elite, but the book was never published and only three chapters have survived.Heaps used this moment in time as a jumping off point for Private Disclosures, making Sherwood a Capote stand-in and attempting to find some sort of closure for the lost exposé.

Gunn cuts a very charming figure as Sherwood, and Heinlein and Benson are likewise agreeable in their multiple roles. Director Stephen Jobes moves his cast nimbly about the Bridge’s confined space. Scenic designer Rudy Jaimes ably turns the stage into Sherwood’s clustered but cozy office, and lighting designer Emma Schimminger gets some good mileage from the theater’s technical limitations.

I enjoyed Heaps’ words very much, but I also felt his script to be a little wanting. He is a very eloquent and witty writer, but I could not help but feel he was playing it safe with this play. The concept of Private Disclosures is fascinating and Heaps captures the spirit and flavor of the era very well; I just wanted more. The play is a swift one-act, and I felt like the story deserved more time and exploration.I wanted Heaps to push the material further and really dig into the characters’ relationships and desires.

Of course, when I saw the play, it was a frigid Sunday afternoon, I was hungover from a friend’s going away party the night before, and the recent plumbing issues had knocked out the building’s bathrooms, so I may not have been in the best position to “receive” Private Disclosures. There are some very lovely moments in this production: Sherwood’s conversation with an aspiring writer and the death of a character later in the play are genuinely moving. However, I felt like I was watching a very polished first draft. Like the fate of Answered Prayers, the truth will remain a mystery.

I would love to see Heaps revisit this play and push for deeper and darker meaning. He has talent as a writer and an eye for intriguing material, and I look forward to see what he tucks into the nooks and crannies of the New York theater landscape in the future.

(Private Disclosures runs at The Bridge Theatre at Shetler Studios, 244 West 54th Street, 12th Floor, through February 2, 2014. Tickets are $18 and are available at www.privatedisclosures.com.)