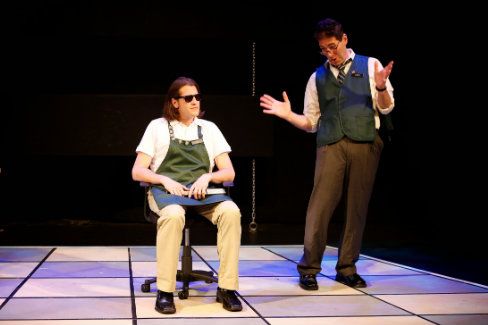 Since its founding in 1979, the mission of Theater Breaking Through Barriers has been to promote and advance artists with disabilities. Originally called Theater by the Blind, the company expanded its focus six years ago and it now works to change society’s perceptions of people with all disabilities, not just those with visual impairment. TBTB’s Fourth Annual Short Play Festival, titled Power Plays, reaches for that goal in interesting ways but they are somewhat undermined by tenuous production values.

One of the successful aspects of the 75-minute show is its range of themes by a starry roster of playwrights: Neil LaBute, David Henry Hwang, John Guare, Bruce Graham, and Bekah Brunstetter. Only two of the five short plays deal explicitly with disability. Others contain lines of dialogue that resonate a particular way when spoken by someone with a physical challenge of some kind, although here the disabilities themselves, if there are any, are refreshingly incidental to other important matters. Meanwhile, the company ranges from actors with clear disabilities, to those whose physical challenges are not discernible, to those who are completely able-bodied.

The scripts are little more than blackout sketches and are not among the best works by any of the participating authors. But there are some moments of pleasure. My favorite on paper is “Between” by Guare. A scene in a sophisticated restaurant between two mysterious individuals, it is both the oddest play of the evening and the most typical of its respective playwright’s oeuvre: a darkly comic scene between two damaged souls trying to connect over intellectual wordplay, terrible secrets, and exotic locales. The performances, which in this scene are under the direction of company founder and artistic director Ike Schambelan, are not distinguished. But it is intriguing to consider the implications of certain lines being spoken by Pamela Sabaugh, an actor who happens to be legally blind.

As she and her companion guiltily try to avoid scrutiny from fellow diners, Sabaugh’s character, named “A,” ruminates, “Can the naked eye ever see what’s really going on? Does ‘naked eye’ mean it sees deep into your soul -- the real you? Or does the naked eye just see through our clothes, like an airport scanner? Or is the naked eye always disappointed?” Later, after her friend, “B,” played by Melanie Boland, reveals a past transgression that took place in Egypt’s Valley of the Kings, “A” declares with uncertain triumph that she can see her companion clearly at last.

Another scene that has enjoyable moments, titled “The Happy F&*#@!G Blind Guy,” is by Graham, a writer perhaps best known for Belmont Avenue Social Club and Coyote on a Fence. In it, the title character, named Tim, is played with charm by David Rosar Stearns, an actor who I presume is also legally blind. Tim is a supermarket bag boy whose incessantly cheerful and seductive demeanor drives his lazier, sighted colleagues into envy and distraction. It’s essentially a sketch comedy full of blind jokes and it gets a little preachy in parts. But you do find yourself engaged by the goofy allure of Stearn’s portrayal even after the play ends.

The most grounded performance of the evening is from Samantha Debicki, who takes seduction to another level in Neil LaBute’s “I Dare You.” Unfortunately though, the production is unable to create the crackling chemistry that would, along with Debicki’s best efforts, drive forward a two-hander that, intentionally or not, comes across as a rather shallow stalker’s fantasy.

Another piece is “Murder” by Brunstetter (ABC’s “Switched at Birth”), a restaurant scene between two dangerously competitive writers (played by Anita Hollander and Sabaugh) that uses a reset device similar to David Ives’ “Sure Thing,” but with more disturbing results... let’s just say that fight director J. David Brimmer makes some significant contributions to this one.

And the final play of the evening is Hwang’s “Underground,” which, despite a cute Wizard of Oz–like premise, is the weakest link in the production chain. It starts off promisingly when an attempt to exit the New York City subway with a woman in a wheelchair (Morelli) turns into a comic Dance of Death. I particularly liked the idea of introducing a character named Vicki the Accessibility Spirit of the Underground (Jamie Petrone). But, in the end, it’s a one-joke, “Saturday Night Live” sketch focusing on the Shit People Say About the Disabled.

All five of the works in Power Plays are laudably unafraid to treat their subject matters with edge and irreverence. And the company is committed to its name. But it would be better served, in the future, with wittier writing and more fully dimensional performances.