Off Off Broadway, New Play
Runs through 11.23.14
The New Ohio Theatre, 154 Christopher Street 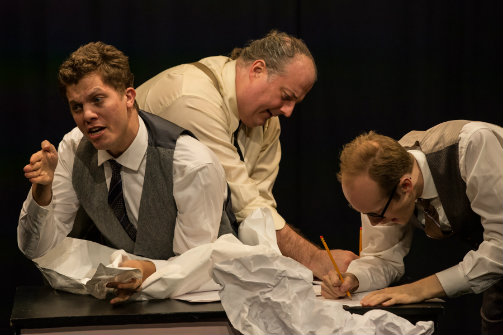 Do you know who Raymond Scott is? Probably not, unless you’re big on music history. But you have probably heard his music, especially if you grew up watching Saturday morning cartoons. With Powerhouse, Sinking Ship Productions explores the man behind the music of those old animated standbys Looney Tunes and Merrie Melodies. Yet rather than just stage a history lesson, Powerhouse ingeniously intersperses scenes from Scott’s life with ones that explore the development of a (fictional) pair of animated characters. The result is a beguiling mix of dramatic scenes, physical theatre, and puppetry that provides both a window into the creative process as well as good old-fashioned slapstick.

Powerhouse is primarily the story of Raymond Scott, a composer, band leader, audio engineer, and electronic music pioneer who was likely far ahead of his time. Much of the play dramatizes key moments in Scott’s life, both professional (leading the “Raymond Scott Quintette” and later, inventing his “Electronium”) and personal (Scott was married three times). As played by Erik Lochtefeld, Scott initially appears mild-mannered, even inconsequential, an unlikely subject for a play. Yet don’t let his docility fool you: Lochtefeld’s Scott is ultimately an exacting task-master driven by the need for precision. One gets the sense that his mind is consistently functioning on a different plane from everyone else around him, and by the end of the evening, Lochtefeld’s quietly powerful performance has painted the image of a genius who was likely impossible to work or live with. Jessica Frey, Hanley Smith, and Clare McNulty play Scott’s three wives. As his first wife Pearl, Frey is especially magnetic, but all three women provide rich emotion that serves as the necessary counterbalance to Lochtefeld’s deceptively machine-like demeanor.

In 1943 Scott sold his entire music catalogue to Warner Brothers; although he never directly scored a cartoon, this sale provides the link for the other part of Powerhouse, in which three animators develop the two characters “Booby” and “Otter.” In life, the fame of the Warner Brothers cartoons far eclipsed Scott’s, so it makes sense that something similar occurs in Powerhouse. While the entire evening is enjoyable, the play truly comes alive whenever the animators (played by Tyler Bunch, Spencer Lott, and Eric Wright) take the stage. To describe too much would take away the wonder of discovery; suffice it to say that Booby’s first appearance will likely be one of the most memorable theatrical moments you have all year. The tight physical collaboration of the three men (occasionally assisted by other ensemble members) is consistently a joy to watch. But as the voice of both characters, Wright deserves special mention; he’s so good that you may find yourself focusing far more on him than on the “Kalamity Kartoons” that he and the others bring to life.

Sinking Ship developed this piece out of letters, recorded phone conversations, journals, news articles, and photographs; this varied source material helps explain the frenetic nature of the play. Powerhouse moves quickly from direct address to various moments in Scott’s life to scenes with the animators. It’s admittedly a bit dizzying at first, especially since a single scene might jump in time without warning. And while there are a few bits that drag, director Jon Levin’s quick pacing is more often a relentless pushing forward that helps dramatize the insane speed of Scott’s mind.

I saw Powerhouse five years ago at the NY Fringe Festival, and was eager to see how it had developed. While I can’t say the production values are significantly different – certainly Carolyn Mraz’s scenic design (3 rolling desks that hide a multitude of surprises) is more or less the same – it is at least 20 minutes longer. While this version fleshes out Scott’s life a bit more, and provides more scenes with Booby and Otter, I’m tempted to say the earlier version was tighter. Then again that could just be, as Scott might say, the “human element” (of imperfect memory) playing tricks on me. But given that Raymond Scott was bent on using technology to eliminate variation and minimize the effects of human imperfection, there’s a certain poetic justice in the fact that it’s ultimately the human element that makes Powerhouse as good as it is.

(Powerhouse plays at the New Ohio Theatre, 154 Christopher Street, through November 23, 2014. Performances are Tuesdays through Saturdays at 8 PM and Sundays at 3 PM. General admission tickets are $20-$30; $40-$45 for reserved premium seats. For tickets and more information visit www.powerhouse-theplay.com.)