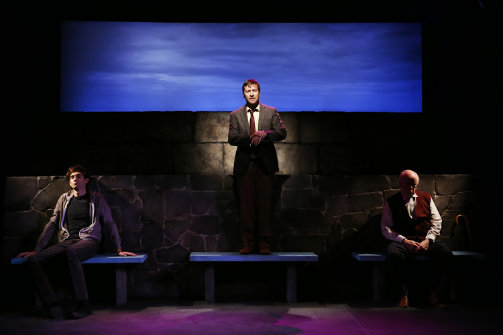 Conor McPherson’s Port Authority is rooted in the tradition of oral history. And with an excellent playwright like McPherson, this makes an engaging 90 minutes. Port Authority was most recently seen in New York in 2008 with a production starring stage heavy-hitters Jim Norton, Brian d’Arcy James and John Gallagher Jr. And the Irish Repertory Theatre production at the DR 2 Theatre is a more than worthy revival.

The three characters represent three generations of Irish men. James Russell plays Kevin, a man in his 20s, Billy Carter plays middle-aged Dermot, and Peter Maloney plays the oldest, Joe. The set, designed by Charlie Corcoran, gives us three benches, one for each man. They’re waiting for something, a bus perhaps, as they tell their stories of unrequited love, or other what-might-have-beens. They each tell their own stories in isolation, without any interaction.

The tales are reflections: of life, love, loneliness, of memory itself even. McPherson gives us a small thread of connection between the men’s tales, but it doesn’t really matter. The stories are compelling and adequately connected without the roughly sketched through lines.

"Maybe there isn’t a soul for every person in the world. Maybe there’s just two. One for people who go with the flow, and one for all the people who fight"

McPherson has Kevin self-describe the characters in the play; these three men would be the former category, passively sitting back, rather than fighting. They are all the everyman, which brings a universality to their stories.

Kevin’s story is about moving out on his own for the first time; he rents a room in an apartment with several friends. One is a girl, who he falls for. James Russell is a natural as the unemployed, slightly awkward, vulnerable Kevin. He’s very believable as he talks about a crazy housewarming party, his friends’ rock bands, and all of that sex, drugs, and rock and roll. He appealingly captures the confusion of the early 20s and, like his cast mates, makes you forget you’re watching a play, rather than a friend telling a story.

Billy Carter, also excellent as Dermot, ends up in a job that we eventually find out was a mistake. He’s drunk at an office party, staring at his boss’s wife’s breasts. He’s at a concert in Los Angeles, doing cocaine. Despite the wild stories, Carter makes Dermot endearing and loveable. And Peter Maloney’s performance is the heart of the piece, as he portrays Joe, who lives in a senior home and receives a photograph of someone he once knew years ago.

All of the additional design elements (music by Ryan Rumery, costume design by Linda Fisher, lighting design by Michael Gottlieb and sound design by M. Florian Staab) beautifully complement each other, and don’t distract from the quiet nature of the play. Also of note: good dialect is like good sound design; you know it’s done well when you don’t notice it. Dialect coach Stephen Gabis is to be credited for the seamless Dublin accents. (Notably all three actors are Irish Rep alumni.)

I imagine that Port Authority is difficult to stage, though Ciaran O’Reilly has crafted a beautifully intimate production that makes it look easy. The audience really has to listen to the words to appreciate the piece, and O’Reilly and his actors have done their job well. Delivering the lines naturally (and since they’re all monologue it’s an immense amount of lines) is half the battle; the other half is creating believable people. It’s a quiet, contemplative play, but one that is definitely worth your time.