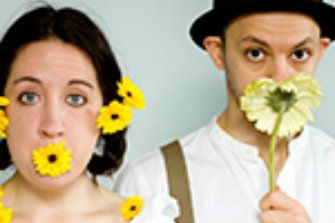 Carrie Brown and Karim Muasher in Petunia and Chicken.

BOTTOM LINE: A tale of love from Willa Cather gets an imaginative retelling from the dynamic duo of Carrie Brown and Karim Muasher.

I will get right to it: Petunia & Chicken may just be my favorite show of this year’s Frigid Festival. Of course, I have only seen three shows so far; I am sure that many of them are just as good, but I fell hard for Petunia & Chicken’s simple charms and the skills and heart involved in this production. Carrie Brown and Karim Muasher are Petunia & Chicken.

Based on the tales of Willa Cather, Petunia & Chicken follows the relationship of two spirited young people growing up in the fields of Nebraska. Petunia (Carrie Brown), a fresh-off-the-boat immigrant from Bohemia, meets the guileless Chicken (Karim Muasher) in his grandmother’s orchard. The bond they form is instant and strong, and in the ensuing years their friendship blossoms into love. What should be an exciting new chapter in Petunia and Chicken’s relationship is cut short by tragedy, and the following years of hardship and self-discovery test their faith and their love.

The story of Petunia & Chicken is not remarkable or novel, but it is engaging in its sweetness, and the characters are so likeable the audience cannot help but root for them. Brown and Muasher, who also created the show, are charismatic performers and have a very pure chemistry onstage. Utilizing skills acquired at Lecoq Based Actor Created Theater and the London International School of Performing Arts, Brown and Muasher bring to life not just Petunia and Chicken, but a whole world of colorful characters. It is amazing to watch the quick metamorphosis of these malleable actors. Each new persona they inhabit is fully formed and lived-in as if they had been playing that character for years.

In the capable hands of director Melinda Jean Ferraraccio the world of Petunia & Chicken comes to vivid life with little reliance on props or set. Barefoot on a black stage, Brown and Muasher make a red scarf and a bowler hat into anything they need them to be: a book, a cat, a fortuneteller’s tent, and so many others. This is not a show that lacks for ingenuity.

After the Frigid Festival, Brown and Muasher have plans to take Petunia & Chicken to schools in the Midwest. Children will be delighted by this show, and hopefully it will awaken in them the possibilities of theater and engage their imaginations.