By David Edgar; Directed by Cheryl Faraone
Produced by the Potomac Theatre Project 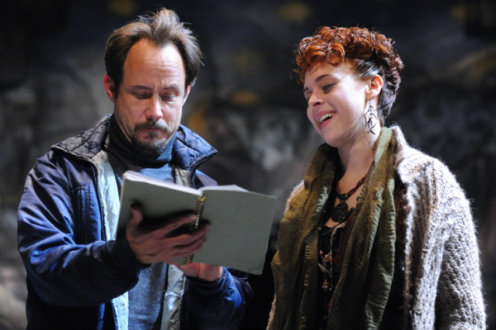 BOTTOM LINE: The Potomac Theatre Project delivers a first rate production of an intellectually stimulating (though sometimes fractured) play about art and politics.

“Ambitious” is one word that suits the revival of David Edgar’s Pentecost, presented by the Potomac Theatre Project. In this sprawling (almost epic) drama, art historians feed on their ambition as they strive to uncover a missing link in art history, a group of refugees take up arms to fight for their political and religious freedoms, and the surrounding government and religious organizations fight to maintain order and bring their infantilized country into the modern world. Debates surrounding art history, cultural displacement, religious fundamentalism, fervent nationalism, and the failure to achieve the Communist utopia comprise the 2 hours and 45 minutes of Pentecost, and certainly are reflective of the ambition possessed by Edgar and the Potomac Theatre Project.

In her director’s note, Cheryl Faraone states that “Pentecost is in fact two plays”, and while this first rate production blossoms under her care, it nevertheless feels like two halves that do not quite meet in the middle. After the house lights dim, a beam from a single flashlight slices across the dark stage when an art curator, Gabriella Pecs (Tosca Giustini), enters leading her guest, the British art historian Oliver Davenport (Jonathan Tindle), through an abandoned church. Gabriella has discovered a giant fresco that promises to revolutionize the history of Western Art, if Oliver confirms her research to be accurate. However, the evidence is continually punctured by the American art historian and agitator Leo Katz (Alex Draper), who proceeds to dismantle their claims stroke by stroke. This trio of fine actors bring heat and passion to these intellectual diatribes, invigorating their historical subjects to make this intellectual material accessible and even entertaining for art aficionados and novices alike.

However, just when these dialectics reach their boiling point and the history of Western Art hangs in the balance, a group of refugees invade the abandoned church and take the three art historians hostage. Thus begins the “second play” of the evening. While the first act is packed with more historic and art-related details than could fit into a Dan Brown novel, the second act switches gears into a harsh critique of the political and religious systems that cast out those most in need.

While both acts feel like independent plays at times, both halves of the show are excellent. The enormous company (almost 30 actors) form a commendable ensemble of textured characters. Faraone’s direction is elegant and precise when dealing with the art world, and fractured and chaotic when the socio-political themes take over. Combined with the efforts of the commendable design team (Mark Evancho, sets; Hallie Zieselman, lighting; Aubrey Dube, sound; Adrienne Carlile & Jule Emerson, costumes) the final moments of the play (which I will not reveal) are as stimulating to the senses as the first parts are stimulating to the mind.

Although Edgar is (arguably) able to string the disparate elements of his play together, his canvas is often too large to see these connections, and as a result, Pentecost often feels tangential when it needs conciseness the most. Nevertheless, in the hands of the Potomac Theatre Project, the ambitions behind the work in Pentecost are translated into a production that is equally engaging to the mind and the senses.