Off Off Broadway, Dance
Ran through 3.8.14
Michael Schimmel Center for the Arts, Pace University, 3 Spruce Street 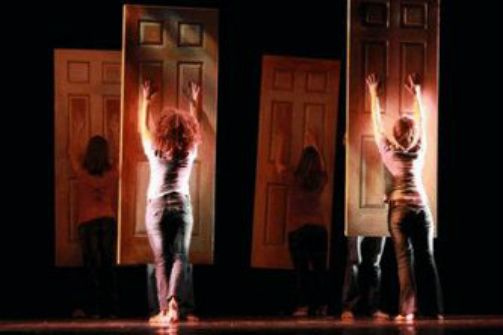 From "Threshold," one of the pieces in Patio Plastico Plus performed by Brian Sanders' JUNK.

There is something about Brian Sanders’ JUNK which dares you with its irreverence. The company is small, not more than eight dancers, all of them extremely athletic, graceful, young, powerful, and controlled but also quite raw. From the moment they take the stage in their first piece called “Blotto!” set to eclectic music which includes Tom Waits and Pink Floyd among others, these dancers are exclamatory, they’re in your face, they’re stumbling around, seemingly intoxicated, falling into splits and collapsing backwards into trash cans. A part of you wants to recoil and go “ouch!” or cover your eyes. If you just pause, restrain yourself, sit up, take notice, and lean in a little closer you figure out that’s all part of the game. You’re not just watching dance; you’re watching part illusion and part daredevil performance. In the grand tradition of commedia dell’arte, carnivals, and circus acts; disbelief is meant to be suspended and supplanted with enchantment and whimsy. Here is a world where anything and everything seems possible, and what starts out as discarded junk quickly becomes found treasure.

Indeed, if “Blotto!” is a comic and delightful introductory ensemble piece that is the choreographic equivalent of Oscar-the-Grouch-meets-Charlie-Chaplin’s-roll-dance, then the performance immediately following is an exquisite and beautiful minimalistic juxtaposition. “The Grid,” a solo where dancer John Luna starts out kneeling, bare-chested, and dimly lit under a rotating solid metal grid and gradually climbs, hovers, writhes, and ultimately ascends above the heavy metal object, is, quite simply, moving. The piece, while not overtly religious, evokes images of the crucifixion as well as The Sistine Chapel, and the effect is poignant and subtle.

The composition that follows, the very sensual and intimate, “Lever,” a pas de deux between Theodore Fatscher and Laura Jenkins where the two dancers, minimally clothed and lit mostly in red, negotiate each other’s body at times like they were a single creature, is also quite stunning in the shapes that it evokes and the athleticism that it requires of its performers. Also notable for its clever charm is “Dancing Dead Music” where Tommy Schimmel and Connor Senning waltz and clamber to John Denver’s not-exactly-comic “Annie’s Song.” The two performers’ gestures are less like lovers than warring wooden collapsible push puppets whose movements are accentuated by jarring gearshift sound effects interspersed throughout Mr. Denver’s love ballad. It is really very charming but not to be outdone by “Threshold,” the final mobilizing piece comprising the “Plus” in JUNK’s “Patio Plastico Plus.” “Threshold” is another ensemble piece and it incorporates wooden doors and swinging interrogation lamps as a metaphor for defiance and transcending barriers of all types.

Lastly, the forty minute piece following the intermission, “Patio Plastico Music,” which includes at least ten disparate musical influences that, again, includes Tom Waits as well as the Klezmer Conservatory Orchestra, can only be described as, well, a little bit indescribable. If I had to try (which I do) I would say that this piece is, in some respects, the stylistic lovechild of Tim Burton, Baz Luhrmann, and Federico Fellini with the acrobatic mystery and clownish-ness of Cirque du Soleil as well as a soupcon of Esther Williams’ iconic 1940s big budget aqua-musicals. If that doesn’t sell you, consider the use of pogo sticks, dancers’ feet housed in tap shoes fashioned from plastic bottles, Gargamel-like masked characters, as well as dancers doing arabesques on moving scooters. Please note that I’m leaving out a lot here – a lot. I didn’t even mention the glowing lawn duck.

More than likely, if you have ever seen JUNK’s stylistic predecessors, the well-known modern dance company Pilobolus, or MOMIX, the company of dancer-illusionists formed by founding Pilobolus member Moses Pendleton, then you have some inkling of what JUNK might be about. Indeed, Mr. Sanders performed and choreographed for MOMIX for over ten years, but, as with all found-object art pieces, JUNK is a little bit exhilarating because it shows you something you think you have seen before, something used in some other context, and then it makes it new again.

(Brian Sanders’ JUNK played at the Michael Schimmel Center for the Arts, Pace University, March 6-8, 2014.  For more information about the company, visit briansandersjunk.com.)