Written and Performed by Sylvia Milo; Directed by Isaac Byrne 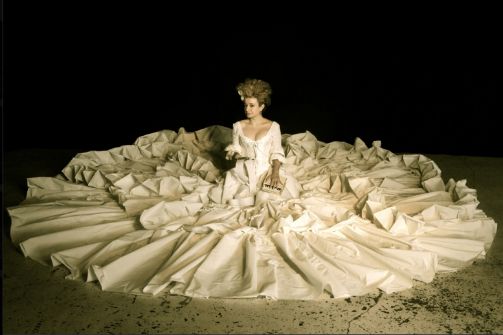 Sylvia Milo in The Other Mozart.

BOTTOM LINE: The Other Mozart is the most dynamic, theatrical, and moving one woman show I have ever seen. It's truly wonderful, and I cannot recommend it enough.

This summer, HERE hosts The Other Mozart, a solo play created and performed by Sylvia Milo about Amadeus Mozart's sister Nannerl: "a forgotten genius." Nannerl Mozart was a talented musician and composer recognized by the courts of Europe and her own brother, but limited by her position in life. Based on research and lines pulled directly from the Mozart family's letters, this play paints the portrait of a talented and passionate woman who was endlessly held back by circumstances of geography, finance, and gender. The audience is guided through a remarkable woman's lifetime of struggle and insistence, growing to love her thanks to the care and spirit of Milo's phenomenal portrayal.

Sylvia Milo infuses the evening with charm, emotion, and endless energy. She plays Nannerl Mozart seamlessly from childhood to old age, through periods of optimism, frustration, desperation, and peace. In Milo's capable hands, Nannerl's life is epic in it's smallness and devastating in its depth.

Under the skilled direction of Isaac Byrne, Milo's expressive performance is complimented by Joshua Rose's sophisticated lighting design, a breathtaking 18-foot dress by Magdalena Dabrowska (National Theatre of Poland), and an extraordinarily vivid and emotive soundscape featuring sound by Nathan Davis and the music of Nathan Davis, Phyllis Chen, and Nannerl's contemporaries Marianna Martines and Wolfgang Amadeus Mozart. This show is the height of theatrical achievement, and the fruit of an obviously outstanding collaboration.

If you love the art of the theatre, the history of music, the conflicts of gender roles, or the power of storytelling, you simply must see this production before it moves on to the next lucky city.

(The Other Mozart plays at HERE Arts Center, 145 Avenue of the Americas, through July 12, 2014. Performances are Tuesdays through Fridays at 8:30PM; Saturdays and Sundays at 4PM and 8:30PM. Tickets are $30, and are available at here.org.)