The Old Man and the Old Moon 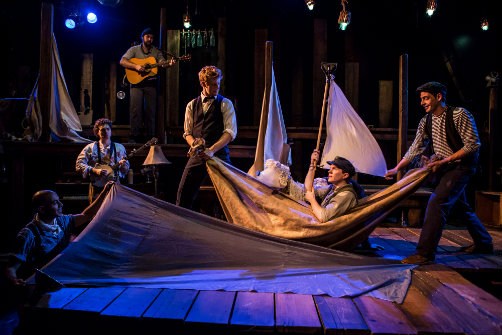 If you loved the brilliantly imaginative, steamer-trunk vaudeville of Peter and the Starcatcher, a similarly delightful but even more original musical play called The Old Man and the Old Moon, by PigPen Theatre Co., is back in New York for one last time this fall after a run downtown two seasons back. And it’s one of the most enchanting shows I’ve seen in, well, many moons.

The creation of a small troupe of astonishingly smart performing artists who, just a few years ago, were undergraduates together at Carnegie Mellon University, the show is an original folktale about a man (portrayed by the marvelously expressive Ryan Melia) whose job is to fill the moon each evening with liquid light. When his restless wife (Alex Falberg, in one of many roles) sets off in a boat one day, the Old Man embarks on a magical and epic journey to find her, letting the moon grow dark in his absence, and the world tip towards chaos.

All seven co-founders of PigPen -- Melia, Falberg, Ben Ferguson, Curtis Gillen, Matt Nuernberger, Arya Shahi, and Dan Weschler -- are featured onstage for this piece. And all are credited with writing the tale; creating the puppetry, along with set and costume designer Lydia Fine; and composing and playing the largely British and Irish folk-inspired score that is part of their stock and trade in their side gig as a touring band.

The seven are, furthermore, credited together as co-directors of Old Moon. Stuart Carden collaborated on the production in its early stages but only came on board as a credited director during the show’s reworking at Chicago's Writers Theatre last year. So it’s fair to say that much of this intricately conceived work has been directed by consensus, an idea that sounds disastrous but, by all available evidence, works glowingly. Its staging is both electric and refreshingly simple, heartfelt and full of wit. And the ensemble of players works seamlessly and without ego to tell the story. That, in fact, is an essential part of its alchemy: The Old Man and the Old Moon is a tale about many things -- the never-changing, forever changing cycle of life; the persistence of distant memory; an obsessive quest that leads its protagonist to the place he least expects. But most of all it is a story about the love of storytelling. Even characters within the drama, like an upright sailor played by the show’s narrator (a commanding Nuernberger), push the fantastic plot along simply for the pleasure of going somewhere they’ve never been before.

That joy of the playful narrative is what drives this musical forward -- no pyrotechnics or virtuosic special effects. When these men want a large boat on stage, they just clasp their arms together in the shape of a prow and declaim in a low drone, “Shiiip!” It’s a joke that stops just short of the self-referential parody of The Book of Mormon or Urinetown. These aren’t theater rebels seeking to overturn convention. They’re boys in a backyard who need a ship to sail into the next scene. And their show’s designers are essential playmates. Fine’s set and puppetry uses found objects -- a bleach bottle for a sheepdog’s face, two planks of wood for an entire shop -- that work with Bart Cortright’s often breathtaking lighting to join in this celebration of discovery. It is flashlight and cardboard theater lifted to a fine art form.