Our Lady of Kibeho 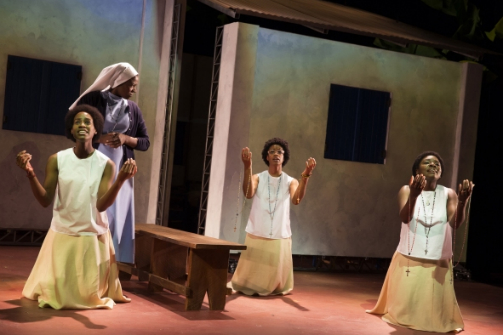 BOTTOM LINE: A very polished, brilliant and compelling account of a village in Rwanda that is turned upside down when a girl starts receiving visitations from the Virgin Mary.

In 1981, in the midst of an ongoing civil war in Rwanda between two ethnic groups -- the Hutus and Tutsis -- a young woman named Alphonsine (Nneka Okafor) begins to make claims of seeing the Virgin Mary and receiving messages from her, the bulk of them urging Alphonsine and everyone else to pray for peace. These apparitions serve as catalysts for confusion, upset, derision, and tests of faith among the people of Kibeho that are masterfully depicted in Katori Hall’s beautiful and enchanting Our Lady of Kibeho.

Set predominantly in and within the outskirts of a school, Our Lady of Kibeho begins serenely and melodically with a choir of young women singing the Angelus, a Catholic devotional. Joined together in unity, the gentle ambiance is soon violently interrupted by Sister Evangelique (Starla Benford), a foul-mouthed, ornery woman who is in the throes of an argument with Father Tuyishime (Owiso Odera), the resident priest. They argue over Alphonsine’s allegations, with Sister Evangelique as the staunt opponent.

Alphonsine, played ebulliently and charmingly by Okafor, is adamant that she is telling the truth about what has been happening to her. Against a simple, but tasteful green background designed by Rachel Hauck, it is clear that Kibeho may be beautiful, but that its residents are not accustomed to the grandeur that Alphonsine seems to be suggesting. Why would the Virgin Mary visit Alphonsine, a poor girl lacking shoes or smarts? What creates even further cause for ridicule, jealousy and animosity is that Alphonsine is Tutsi, the group that, according to the Hutus, is dishonest and lowly but still favored.

Though there are a gaggle of girls who don’t believe Alphonsine, chief among them is Marie-Claire (Joaquina Kalukango), a domineering and oppressive bully who acts like she’s in charge of the girls as well as the superiors. Anathalie (Mandi Masden), a mousy and bespectacled friend to both girls, doesn’t know who to believe until the Virgin Mary starts to appear to her. Soon, a mayhem of Salem Witch Trial proportions unfolds, attracting a visit from Father Flavia (T. Ryder Smith), a skeptical investigator from the Vatican.

At a modest $25 per ticket that is well worth the price and then some, Our Lady of Kibeho offers a wonderful theatrical experience that will delight you, astound you, and hopefully encourage you to re-examine what you believe or don’t believe about faith and the supernatural. Concurrently, because the show is based on real-life events, it also offers a possible, fresh portal into the turbulent relations between the Hutus and Tutsis, a subject that has already been explored in an entirely different way by movies like Hotel Rwanda and various documentaries. Whether you believe that the Marian apparitions transpired or not, Our Lady of Kibeho presents an atmosphere in which the conflicts between the tribes could have been thwarted before they escalated into carnage. That alone gives you something to ponder, if not for the past, but for any battles that arise in the future.

Everything in this production is expertly crafted to create visual and psychological appeal. Director Michael Greif utilizes every inch of the Irene Diamond Theatre, staging scenes and scrimmages not only on the stage, but on the walkways between the audience’s seats. He also elicits first-rate performances from the cast. Together with Hauck's set design, props and set dressing designer Faye Armon-Troncoso reveals calms before storms with wonderful, swiveling set pieces: on one side, the stable edifice of a dormitory, on the other side, the interiors of rooms that either harbor reverence and devotion or chaos and calamity. Everything, from the jaw-dropping aerial and special effects by Paul Rubin and Greg Meeh to Matt Tierney’s magnificent tribal music all work together to create a powerful experience that is not likely to be forgotten soon.

Yet, the genesis where all the great production elements spring forth could not be possible without a well-balanced, thoughtful, and moving script by Katori Hall. Hall not only creates a fabulous microcosm of Rwanda with a strong, blood-pumping pulse, but she gives each and every technician and artist involved with Our Lady of Kibeho an outlet to shine.The manner with which she handles the melding of two giant topics: war and faith, is remarkable. Here, Hall demonstrates her penchant for pensive and passionate writing.

With the feast day of Our Lady of Kibeho coming up on November 28th, Our Lady of Kibeho is timely for this season. Patronizing this show will not only give you a chance to learn more about what is indelible on the hearts of many in Rwanda, but hopefully, the production will leave its own mark on you.