On a Stool at the End of the Bar

By Robert Callely; Directed by Michael Parva
Produced by The Director's Company 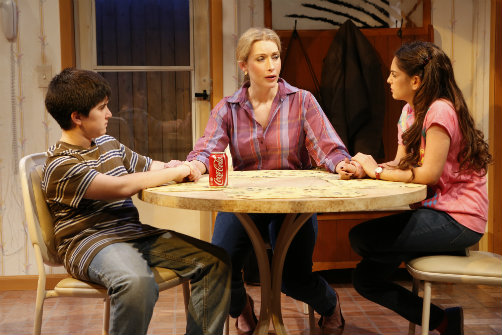 Zachary Brod, Antoinette Thornes, and Sara Kapner in On A Stool at the End of the Bar. Photo by Carol Rosegg.

BOTTOM LINE: A respectable effort to explore the plight of transsexuals that some might find more invigorating and exciting than others.

On A Stool at the End of the Bar, a new play by Robert Callely, explores the ignorance and misunderstanding that one trans-woman faces in the 1980s. Chris McCullough (Antoinette Thornes) is a suburban woman who seems to have it all -- a well-paying job, a hard-working and loving husband named Tony (Timothy John Smith), and three smart kids. The three kids, named Joey (Luke Slattery), Angie (Sara Kapner), and Mario (Zachary Brod), are actually Tony’s from a previous marriage, but they’ve accepted Chris as a second mother.

However, as in most suburban family dramas, there’s a devastating secret that must come out -- Chris’ brother Michael (John Stanici) has come to inform his sister that their parents have recently died, leaving her $97,000. The detail that will send all the characters into turmoil is the name on the check: “Christopher Eugene McCullough, AKA Christine McCullough”. We find out that Chris was born a man, and worked as a prostitute in order to afford a sex-change operation. This being the 1980s, when attitudes towards LGBT people weren’t nearly as accepting as they are today, the characters’ reaction to this news is less than thrilled.

In 2014, the plight of trans-men and trans-women is still relatively untrodden ground. However, with films and series’ like Transamerica and "Orange is the New Black," both of which feature prominent trans characters, we are more aware of the challenges faced. On A Stool at the End of the Bar doesn’t seem to add anything new to the conversation about trans-people, other than giving a glimpse of how far we’ve come. Had it been written in the 1980s, I feel like it would’ve been a shocking play that explored a very taboo issue.

The cast does their best with the material. Thornes gives a strong performance as Chris. Timothy John Smith is fine as the insecure husband. Slattery, Kapner and Brod play the three children with intelligence and honesty. Robert Hogan has one hilarious scene as a woefully incompetent priest. Michael Parva directs the production and does a fine job, although the pacing could be improved, particularly in the first act.

On a Stool at the End of the Bar is a completely respectable effort. There is every reason to feel sympathy for Chris -- she could lose the life she’s worked to build for years for the simple reason that she was born a man. However, for me the play was missing that extra push that made me feel for the characters. While the characters’ hostility towards Chris and her secret is understandable, I found their reactions very selfish and cruel. Additionally, there are a few plot points that are introduced in the second act that aren’t satisfactorily resolved. As a result, I never quite got into the play. My guest, however, was impassioned and angered by the play’s portrayal of a misunderstanding and unsympathetic society. There is definitely an audience that needs to see this play, if only to acquaint themselves with the obstacles that trans-people face.