Tickets are no longer available for this program, but New York City Ballet's 2014 Season runs until June 8th. See nycballet.com for tickets and more information. 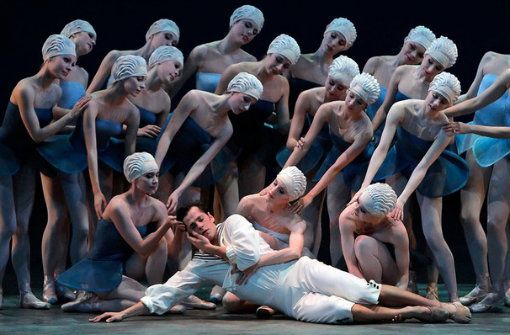 New York City Ballet director Peter Martins paints a landscape of contemporary choreographers' work. On Program 1, two of the five works were his own works. In his 1988 piece Barber Violin Concerto, a modern duet and a classical ballet duet are compared. Interestingly enough, the modern couple was originally David Parsons and Kate Johnson, esteemed Paul Taylor dancers. Martins makes the obvious aesthetic choices when replacing his modern couple with a shorter brunette pair. Each pair does a separate dance and then as they change partners the ballet dancers get modernized, go through struggle, and the ballerina’s hair comes spiralling out of her bun. It feels a little outdated next to the contemporary work we see later.

Martins' second work, a collaboration and premiere of Les Bosquets, is an exciting opener with the break dancing artist Lil Buck (made famous by YouTube), the stage direction of French artist JR, and the music of Woodkid all making their Lincoln Center debut. Ballerina Lauren Lovette dances a light solo alongside Lil Buck’s inventive and daredevil twisted contortions and knee turns. The use of video as the two stare at each other’s limbs and its projection on the backdrop is an intriguing play of a body as moving sculpture seen from all angles. The corps de ballet dancers clad in spotted unitards finish in a line at the end forming an unclear image of what I think were two eyes. The piece was a melding of all these talented artists, but it felt more like a showcase for Lil Buck who did not fail to impress despite Lovette’s flowery footwork and Marc Happel’s innovative pixelated costumes.

Christopher Wheeldon's This Bitter Earth is a duet showcasing the return of injured principal dancer Wendy Whelan along with Tyler Angle in passionate and seamless turns and lifts that seem to lengthen and deepen Dinah Washington’s soulful song (for which this duet is named). It made me want to see the rest of the piece Five Movements, Three Repeats. Another breathtaking duet, Herman Schmerman Pas De Deux choreographed by William Forsythe, is said to be a ballet about nothing. The brilliant part is that it encapsulates everything about New York City Ballet that is formidable. The two incredible dancers, Amar Ramasar and Maria Kowroski, ooze in and out of beautiful extreme shapes and have the spirit of daring and then casual grooves. The sparse lighting and costumes are Balanchine approved and it’s a joy to see the virtuosity.

The last and lengthier piece of the program, Namouna, A Grand Divertissement by Alexei Ratmansky, takes inspiration from 1882 Petipa ballet set on the Paris Opera Ballet  and a poem by De Musset. The music is a beautiful canvas by Edouard Lalo from which several loosely strung together plots line up with incredible dancing. All the principal dancers have the spirit of frontiering new territory in ballet. Maybe this energy is where ballet does best, where the choreography challenges the younger dancers and pushes them to this level or speed and technical prowess. Had it not been for Sara Mearn’s carefree and fierce dancing, Daniel Ulbricht’s ballone and Ashley Bouder’s graceful comedic timing, I might have spaced out. It is a fun look back at what contemporary choreographers have been up to.

(New York City Ballet: 21st Century Choreographers I played at the David H. Koch Theater, 20 Lincoln Center Plaza through May 4, 2014. Other programs run until June 8, 2014. Performances are Tuesdays at 7:30PM; Wednesdays at 7:30PM; Thursdays and Fridays at 8PM; Saturdays at 2PM and 8PM; and Sundays at 3PM. Tickets are $29-$159 and are available at nycballet.com. )