The Mystery of Irma Vep 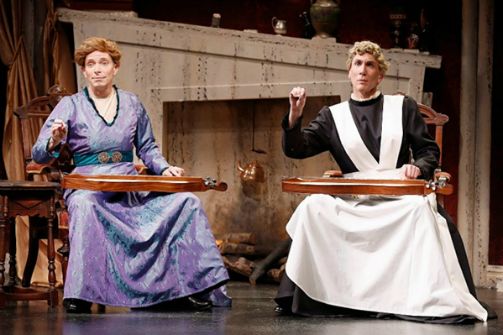 Arnie Burton and Robert Sella in The Mystery of Irma Vep.

BOTTOM LINE: While the myriad references may be lost on some audiences, The Mystery of Irma Vep is still entertaining enough to hold its own thirty years after its premiere.

I’ll likely need to quote various statements made in the Playbill's liner notes and press releases to adequately discuss The Mystery of Irma Vep. The play alternatively takes place at an estate near Hempstead Heath and in the far reaches of Egypt. Lord Edgar Hillcrest (Robert Sella) has just taken a new wife, the actress Lady Enid Hillcrest (Arnie Burton) after the death of his previous wife, Irma Vep. Irma’s death was clouded in mystery as discussed by the servants of the house, Jane Twisden (Sella) and Nicodemus Underwood (Burton). The shenanigans that follow include vampires, werewolves, mummies and witches portrayed by the two actors.

Stylistically the play is just as schizophrenic as the description above with elements of vaudeville, Shakespeare, musical interludes, and the obvious quick changes. This mania is both the best asset and the biggest encumbrance on the piece. For every joke that made me burst into laughter due to a subtle reference, there were ten others that flew right over my head. What this accomplishes is a vastly entertaining romp for a disparate audience, but one that likely no one can truly appreciate completely (at least not without CliffsNotes and a second visit). The Playbill lists the show's homages to Rebecca, Wuthering Heights, Gaslight, Nosferatu and She Who Sleeps… as I'm not familiar with all of those sources, I know I missed some of the references. That said it is easy to see why Irma Vep has become an international success.

This specific production features stellar performances from both actors, slick direction from Everett Quinton and a cleverly functional set designed by John Arnone. Even when a segment would take place that I couldn’t personally connect to, the anticipation of the next bit of hilarity was enough to keep me engaged. Particular highlights for me included Sella’s descent into a drunken stupor, the over the top werewolf transformation and the mummy’s resurrection ritual -- but surely every audience member will have their own list. Suffice to say, there’s something for everyone in Irma Vep even if it would be a rare bird that gets everything.

(The Mystery of Irma Vep plays at the Lucille Lortel Theatre, 121 Christopher Street, through May 11, 2014. Performances are Tuesdays and Wednesdays 7:30PM; Thursdays and Fridays at 8PM; Saturdays at 2PM and 8PM; and Sundays at 3PM. Tickets are $60 and are available at ovationtix.com or by calling 212.352.3101.)