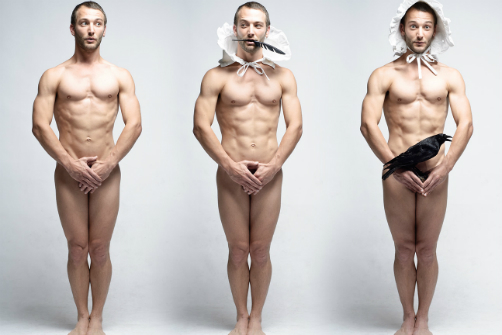 BOTTOM LINE: An elegantly crafted if distanced production with some difficult and challenging material. Particularly well suited for the young, gay, Mormon crowd out there. You know who you are!

How can you not be jumping to purchase tickets to a play with the title The Mormon Bird Play, an advertising campaign featuring perfectly sculpted almost-nude men beckoning you with boy-lesque and pioneer women drag?

Right from the start of Bird Play, I was transported into a new and strange place from my comfortable seat to a recorded curtain speech that discourages the desire to tweet in this theater. I’m not sure it’s Twitter that's being referred to, as there will soon be several lines of dialogue that arrive at the truth with critical words, like "God," replaced simply with “tweet.” It’s an intentionally irritating bit of pedagogy to have your teacher never quite reach the proper language.

This breakdown in communication runs rampant here with our central character, Ivona (played with rightful quiet concentration by Jose Dao), a young mute girl thrown into the family of her Mormon cousins in Salt Lake City after her mother’s death. Ivona discovers an injured bird and her care for the creature becomes a topic of much conversation by the Mormon school children. Her care revives the bird, bringing her both friends and enemies. Her friends believe her to be a queen of some bird kingdom (as is the ultimate fate of good Mormons) while others find her acts much more villainous. Sadly, my lack of knowledge shows here, as the details of this Mormon allegory get a bit hazy. There’s certainly a journey taken for these young boys and girls as they attempt to navigate their world with a strange visitor and only their Mormonism to guide them.

Director, playwright, and designer Roger Bennington has crafted a skilled piece. In the very first image of the play we see a row of men dressed in black and white almost bird-like regalia while singing a Book of Mormon-esque chorus. The choreography here keeps the bodies almost entirely still save for rapid eye and hand movements, a jarringly humorous “twittering.” There’s a significant disconnect in this piece that keeps me far removed from the emotional destruction of Ivona’s story, and this may be Bennington’s intent as he offers us a half-curtain, scene titles, drag, and distanced characterizations that seem to be borrowed from Papa Brecht.

I was left with a strong sense of disorientation after seeing The Mormon Bird Play, rightfully or wrongly wondering just exactly what had transpired in the events before me. The elegance of direction, design, and writing here pushed me away from clarity and into something much more uncomfortably vague -- nay, dreamlike. In the last lines of the play, a boy desires to be pinched (touched/loved/pained) by another boy. He is unable to provide. He needs to know what it feels like -- how anything feels like for that matter -- after all of this nothingness and denial of what it must be like to grow up Mormon and gay. We’re left similarly craving more, unrequited.