My Daughter Keeps Our Hammer

Off Off Broadway, New Play
Runs through 2.15.14
The Flea Theater, 41 White Street 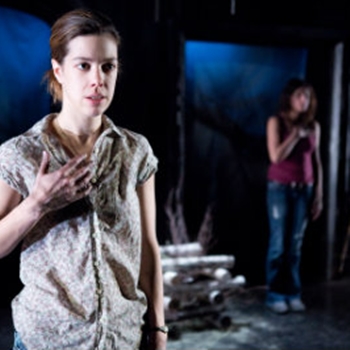 Katherine Folk-Sullivan and Layla Khoshnoudi in MY DAUGHTER KEEPS OUR HAMMER.

BOTTOM LINE: Estranged sisters Sarah and Hannah retell the harrowing event that recently brought them together. Through introspective storytelling, Daughter speaks from the subconscious.

Below, in the Flea’s downstairs downtown space, is a funeral for a sheep named Vicki: a distant mother’s beloved pet, but also two sisters’ bane. Sarah (Katherine Folk-Sullivan) and Hannah (Layla Khoshnoudi) are estranged siblings living dismally in Eaton, CO. The oldest takes cares of their mother, the younger dreams of acquiring her absent father’s truck. My Daughter Keeps Our Hammer abstractly airs out the stale family dysfunction Sarah and Hannah know too well. In the midst is the daughter’s strange retelling of a difficult event. Frontward facing, the two daughters elucidate us on their life, or lack thereof.

The production nicely blends the abstracted work on stage and the pedestrian, natural dialogue within the script. Although, it is hard to call the language in the play “dialogue” because the characters never speak to each other. Daughter evolves through audience-facing monologues. It is less a play and more a confession. The production begins slowly and with little grab, the action being confined to director Danya Taymor’s quizzical blocking in the first half, but the confessional gets interesting when we learn about Vicki’s hold on the two sisters. Immediately I’m reminded of Edward Albee’s The Goat; or, who is Sylvia? Yet I don’t think Daughter is merely a rehashing. Like The Goat, though, this play hinges in humanity discovering its animal magnetism; its capacity for ferocity. The female leads further that discovery with some cold realities. When either is speaking, there’s a clear distinction: Sarah is a thinly spread nurturer who doesn’t get enough praise, while Hannah remains an entitled adult child. Both are about to pop, but I’m thankful for playwright Brian Watkins use of nuance with these female roles. Where female and filial expectations are concerned, Sarah and Hannah break through at every turn.

Though I didn’t care too much for the monologue device, I was mesmerized by the set: a shrouded outback with rustic features, creating for the audience a lopsided camping experience: if Sleep No More were molded after a western. Whenever the sisters interacted with the long front curtain or built the fire I was grabbed by the intelligence and forethought. Dialogue and visual representation misfired at times, but sometimes it was spot on. For example, when there’s a considerably horrible confession, some sort of inward malice the sisters can’t swallow, they turn on an overhead lamp, blocking out all else. The beginning ghost story is perplexing and admiring. It is illuminated not only by Sarah’s callous retelling, but also by an actual flashlight which distorts the character in interesting ways.

Throughout the piece I thought of who this play existed for. These sisters engage with a metaphysical experience, letting them understand why they are where they are. It could be that this is the first time they’ve ever stepped to resolution. The friend who accompanied me said something interesting. I remarked this play was somewhat heavy, but she replied it didn’t matter, she just wanted release. The same can be understood of this play. While we don’t see their tormentors, we the audience get a rare opportunity to be a sounding board for characters who just need a release. Catharsis: apparently it isn’t just for ticket-holders.

(My Daughter Keeps Our Hammer plays at the Flea Theater, 41 White Street, through February 15, 2014. Performances are Wednesdays through Sundays at 7PM. Tickets are $15-$35 with lowest priced tickets available on a first come, first served basis. They can be purchased by calling 212-352-3101 or online at theflea.org.)