By Kris Lundberg; Directed by Jay Michaels
Produced by Shakespeare's Sister Company
Part of the 2014 Dream Up Festival

Off Off Broadway, New Play
Runs through 9.7.14
Theater for the New City, 155 First Avenue 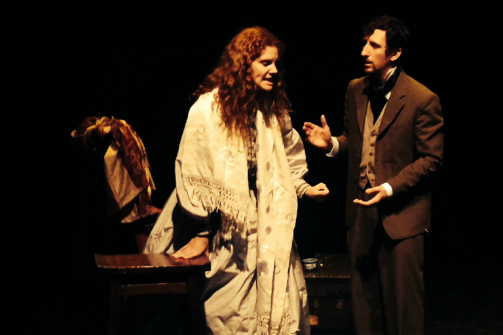 BOTTOM LINE: A true-to-life narrative about artist Dante Gabriel Rossetti and his chief muse, Elizabeth Siddal. This show has a vibrant and promising premise, but lacks entertainment value and intrigue.

Such is the starting canvas for Kris Lundberg's Muse, a portrait of 19th-century artist Dante Gabriel Rossetti's tortured relationship with his primary muse-turned-wife Elizabeth Siddal, told from Dante's perspective. From there, their intertwining real-life stories are fascinating and peppered with many highs and lows, of which patrons of this play are privy to a few. Unfortunately, despite the playwright's impressive knowledge of the characters and the veritable tour of their moments and emotions, Muse lacks excitement.

Set in Victorian London during a reformist/regressive period in art, Muse begins and stays almost inertly in a painter's studio. We meet Dante Gabriel Rossetti, played emotively, and sometimes excessively so, by Greg Pragel, while in the throes of an alcohol-induced hallucination circa haunting. In a drunken monologue, he addresses "Beatrice" (of Dante Aligheri's Inferno), an affectionate moniker given to his wife Elizabeth. After bemoaning his inability to paint because he has lost her, the story rewinds back to the beginning of his madness and sorrows.

Enter Elizabeth Siddal (playwright Lundberg, competent in this role), a new model for his quattro-centric sensibilities. It is quickly established that Siddal is a highly-sought after model who works regularly, and that Rossetti is no slouch himself. They connect on a mutual love of art and spirituality, amid other things, through some talky pleasantries that deftly reveal much about the era as well as their passions. It isn't long before Rossetti becomes so captivated by Siddal that he convinces her to model exclusively for him, both before an easel and in the nude. "Unwed and in bed" was certainly scandalous and forbidden during this period, but rather than dwell on the impropriety, Siddal's romance with Rossetti is ushered in playfully and jovially with music. It's just unfortunate that the fun ends there not only for the characters, but for the audience as well.

Much blossoms between the pained couple after that, most of it causing an insurmountable rift: artistic rivalry, disillusionment, addiction, loss; all producing an uncomfortable love. Individually, these arts icons led very juicy and prismatic lives. On stage together, they should be dynamic. However, there is no sizzle or pop. Despite all the effort that seems to have gone into this production, the rendering remains flat.

Lundberg, an accomplished writer and actress, worked hard to bring Muse to fruition. The result of 15 years of research and labor, the writing reflects her academic and intellectual endeavors. Lundberg even pulls from history that pre-dates Dante and Elizabeth's acquaintance and post-dates their time together. While that works to make the story a little fuller and it is quite admirable that Lundberg knows so much about her subject, too many facts and figures may have hurt the results.

Though Muse may appeal to classicists, it is lacking the earthiness required to make the story compelling and endearing. The outcome from attending Muse is peering into the past without actually being able to step into it. Director Jay Michaels makes a sincere attempt to puncture the present when, at one point when Siddal is away in France, he makes Lundberg enter the stage from the audience and interact with its members. It almost works to make the story more approachable.

It is reasonable to deduce that Lundberg must have been and continues to be really taken with the pre-Raphaelite era in order to spend so much time and energy into trying to bring it to life. By allowing for more heart and soul on the stage, hopefully we can be charmed too.

(Muse plays at the Theater for the New City, 155 First Avenue, through September 7, 2014. Remaining performances are Thursday 9/4 at 9PM; Saturday 9/6 at 8PM; Sunday 9/7 at 5PM. Tickets are $15 and are available at smarttix.com. For more show info visit dreamupfestival.org.)