Performed and Curated by Miki Orihara 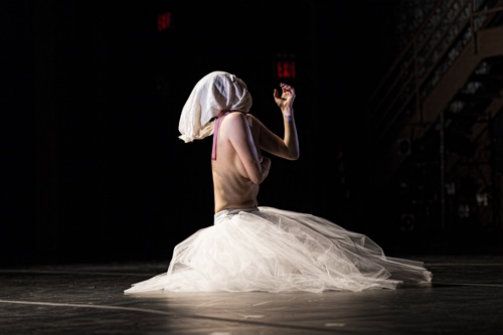 BOTTOM LINE: This veteran Martha Graham dancer shows that what she is made of is larger than the sum of all her parts.

Miki Orihara, legendary Graham dancer, had her first solo concert. The theme of the evening was a Japanese expression, Onko Chishin, which means that there is something new to discover in the familiar and the past. This championed modern dancer who has performed with the Martha Graham Dance Company since 1983 took a leap of faith in going out on her own and it paid off. Her concert also included a benefit performance for Japan. Her performance documented the path of the modern dance giants, Martha Graham, Jose Limon and Martha Clarke, her own choreography, and newcomer Adam Barruch. The five distinctly different solos were intersected with music by jazz pianist and composer Senri Oe whose agile hands attacked the piano keys with ferocity at one moment and in the next instant made the piano sound crystalline.

The first solo is what we are used to seeing Orihara excel in. Her signature style in Martha Graham’s Satyric Festival Song (1932) showcased her light jumps (and completely silent landings) and brought forth her spritely side. The next solo was Maenad by Limon (1971) and it smoothed out all her edges from the previous piece. Her movements left a trail of cursive smoke behind her as she danced the dance of Isadora in a red silk draped dress. Martha Clarke’s stark and haunting Nocturne (1991) was the third piece, where we started to see how versatile Orihara is. In this abstract version of a dying swan, she was able to portray pain and suffering with her head encased in gauze. At the end, she revealed part of her face and the ribbon around her neck that held the gauze on became a cane and she limped off stage with the prowess of a mime transcending her own body.

The evening then stepped up to the present day with her own work, Prologue, a multi-media element with a film of her sitting quietly by Tobin Del Cuore. The end of the piece had little movement but her hands slowly blinking open and shut like the twinkling of stars. Her eyes gently lifted up like the rising of the sun. This was so touching that it almost made me cry. Memory Current, the last solo of the evening by the young and upcoming Adam Barruch, showcased Orihara’s voluptuous dancing and musicality. She was dressed in an organic moss colored outfit by Karen Young. Her costumes always have a natural beauty to them and this show was no exception. She moved lithely across the stage and then sustained a grasp of her face with her hands as a gong would hold a note with a resonance.

Orihara has all the qualities of a refined actress and highly skilled modern dancer. The stripped bare stage at La Mama has never looked so beautiful as it did lit by Clifton Taylor. After the applause, Orihara took a heartfelt moment as she expressed her gratitude  working with her dream team of designers and stage manager. In a world that treasures the new and youthful, I realized that although her capturing of youthful movement was exciting, her full scope of emotional range was what brought the house to its feet. There is a weight and depth that isn’t sincere without the life experience.

(Miki Orihara Solo Concert: Kyomei-Resonance played at La MaMa's Ellen Stewart Theater, 66 East 4th Street, through May 11, 2014. Performances were Thursday, Friday and Saturday 8PM; and Sunday at 2:30PM. Tickets were $20, $15 for students and seniors and were available at lamama.org.)