Middle of the Night 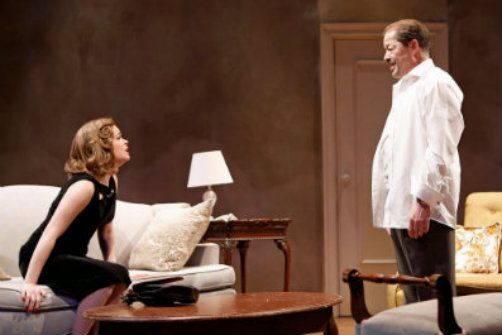 Nicole Lowrance and Jonathan Hadary in Middle of the Night. Photo by Carol Rosegg.

Jerry Kingsley is a downcast, plain-looking, middle-aged businessman who is no one’s idea of a romantic hero. No one, that is, until writers like Paddy Chayefsky came along. At the height of TV’s golden age in the 1950s, Chayefsky penned more than a dozen acclaimed teleplays over five years, many of which raised up humble, middle class souls as paragons of dramatic literature—men and women who dared to be more than just representatives of their economic status. For Chayefsky, class did not determine how theatrically worthy one’s affair of the heart could be.

A few of the writer’s works, like the Oscar-winning Marty, made it to the big screen. The one that featured the aforementioned Mr. Kingsley, a solidly constructed play called Middle of the Night, was adapted for both Broadway and the movies. Now, thanks to Keen Company, the play version of Middle of the Night is currently enjoying its first major New York revival in 57 years.

Under the sensitive guidance of Keen’s Artistic Director Jonathan Silverstein, this production’s major achievements are twofold: reminding us how the name Chayefsky deserves to be uttered in the same breath as Inge, Miller, and Odets as poet laureates of the rising middle class; and spotlighting Jonathan Hadary’s stunning portrayal as Jerry. Hadary is one of those actors who are mesmerizing without stealing focus from his fellow players. Every cell of his body is alive with the vibrant actions and reactions of his character, a manufacturer who finds himself drawn into a passionate romance with Betty (Nicole Lowrance), a secretary in his office who is half his age. It’s a plot situation that even now has the power to shock; in the mid-fifties, of course, it was downright scandalous. (It doesn’t help that Jerry is Jewish and Betty is not.)

And with the right casting, it should also be heartrending. Hadary’s three major predecessors in his role—from teleplay to Broadway to Hollywood—were E. G. Marshall, Edward G. Robinson, and Fredric March, respectively. And while they were all undoubtedly marvelous, there’s a quality to Hadary’s acting that was very likely missing from those three who, over the course of their careers, were more famous as gods, gangsters, and presidents. That missing quality is what Hadary brought to his Tony Award-nominated turn as Herbie in the 1989 revival of the musical Gypsy. Several fine actors have played that role in New York since then. But it was Hadary who really broke your heart when he walked out on Tyne Daly’s Mama Rose. Because, frankly, you didn’t sense that he had any better prospects outside that stage door. Likewise, in Middle of the Night, when Hadary’s Jerry begins to give up his dream of happiness with Betty, you can almost see the lights inside this small man begin to fade for good.

Betty is referred to in the cast list merely as “the Girl,” but under Lowrance’s care, she is emphatically more; a wonderful combination of fresh-faced innocence with steely resolve. She is Jerry’s equal, despite the yawning age gap. And Lowrance's attention to detail works beautifully with Hadary's and Silverstein's. Notice her mood shift with delicate subtlety just as she walks into the glow of designer Jonathan Spencer's lamp light. Watch how her facial features respond with barely perceptible differences, depending on which character is speaking to her.

Not everyone in Silverstein’s ensemble is as consistently strong as these two, although Amelia Campbell excels in a double role as Betty’s mother and as a middle-aged widow. Melissa Miller has a fiery presence, not just as Jerry’s adult daughter, who has decidedly mixed views about her father’s affair, but in the much smaller role of a wide-eyed but sassy friend of Betty’s. And everyone in the cast does their part in maintaining the energy and pacing of this long-forgotten drama.

(Middle of the Night plays at the Clurman Theatre at Theatre Row, 410 West 42nd Street, between 9th and 10th Avenues, through March 29. Performances are Tuesdays through Thursdays at 7PM; Fridays at 8PM; Saturdays at 2PM and 8PM; and Sunday matinees at 3pm. Tickets are $62.50 and are available at telecharge.com or by calling 212-239-6200.)