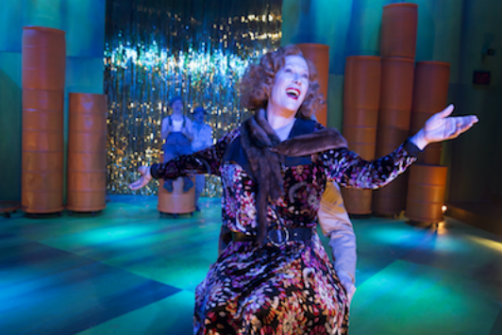 Justin Vivian Bond in A MAN'S A MAN. Photo by Richard Termine.

BOTTOM LINE: Duncan Sheik and Justin Vivian Bond light some sparks in an otherwise dry revival of an early play by Brecht.

In 1926, the German world premiere of A Man’s a Man marked one of Bertolt Brecht’s earliest forays into the epic theater form, which later gave birth to such monuments of drama as Mother Courage and Her Children and The Caucasian Chalk Circle. Classic Stage Company, which revived Chalk Circle last spring, now presents a rare production of the earlier play. And while the pleasures of this revival are a bit isolated, this nearly 90-year-old work can, at least on paper, speak powerfully to our times.

A naïve, good-hearted dockworker named Galy Gay (Gibson Frazier) is robbed of his identity by unscrupulous soldiers, coerced into thinking he is someone else, and transformed into a vicious fighting machine. After all, “one man is like the other,” assures one of the members of the regiment, played by Martin Moran. “A man’s a man.” Or at least that’s so within the dehumanizing environment of war. The profoundly pacifist but cynical Brecht paints a chilling portrait of a world of anarchy in which, to emerge as a victorious individual, as Galy Gay does (well, sort of), you must be open to be dominated and stripped — for all practical purposes, raped — of your personhood. Weakness is strength, in this militant society. And identity is gained only when it is lost. These are all terrifying thoughts in an age of cyber theft,  globalized conformity, and endless conflict.

However, part of what’s lacking in director Brian Kulick’s production is a visceral connection to that world outside the doors of CSC. As though he were mistaking Brecht’s long-debated alienation effect for emotional flatness, he leads Frazier through an often-dull performance, with only occasional moments that stir the audience. Faring better are some of the other downtown theater veterans in the cast, like Moran, and particularly two who can often be counted on to electrify a stage. Stephen Spinella has long been a master at portraying the small man reaching up, often triumphing in his own modest fashion. But here he unquestionably broadens his range by playing, with dynamic flair, the heavy in this story: a fearsome, grizzled sergeant whose decline starkly mirrors Galy Gay’s ironic rise.

Meanwhile, the glorious Justin Vivian Bond plays Widow Begbick, the owner of a mobile army canteen who is a hard-bitten survivor, a war profiteer, and, yes, an early prototype for Brecht’s legendary Mother Courage. Formerly the Kiki half of the award-winning rebel cabaret duo Kiki and Herb, Bond is a wonderful match for composer Duncan Sheik (Spring Awakening and the current London box-office smash American Psycho). Both got their big breaks in rock music surroundings but moved with a vengeance into other venues. Here Bond isn’t always at ease in Kulick’s languid staging, but Begbick’s songs are gorgeously sung. The primary problem is that Sheik’s quite lovely music has been pre-recorded, whereas Bond is most at home in the cabarets and bars of the East Village, taking charge of each song, letting an accompanist follow, and inspiring the audience to hang onto every unpredictable phrasing. Perhaps it’s fitting, thematically, that such a distinct creature would be, here, boxed into an assembly line pace. But it’s more likely that Kulick was simply cutting corners on the budget. In those moments, it’s hard not to miss the fantastic live music by César Alvarez and The Lisps in the Foundry Theatre’s exquisite revival last year of Brecht’s Good Person of Szechwan.

Despite this setback, one of the high points in A Man’s a Man is when Bond emerges after intermission and sings a number that, we are told, was cut from the second act. It’s a haunting tune by Sheik, to words that are Poe-like in their plaintive, rhythmic style: “Waking then in spotless linen / With you lying next to me / I thought: here’s the shroud so clean / in which I’ll have them bury me.” It’s a rare moment of lyrical beauty in this largely prosaic English translation by Gerard Nellhaus.