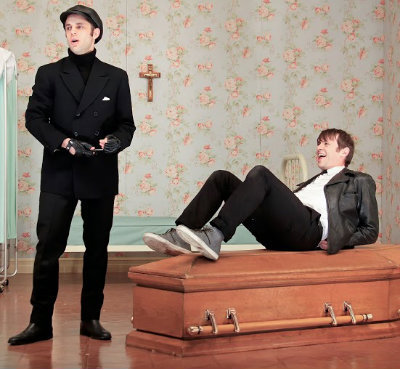 In the theater, it is often said that comedy is more difficult to master than drama — which is why Red Bull Theater’s production of Loot is so impressive. If comedy is hard, farce is even harder, but Jesse Berger’s production of Joe Orton’s parody of farce hits just the right tone.

Though considered one of the modern classics, neither Joe Orton nor the name Loot probably have name recognition. The play debuted on Broadway in 1968. In 1986, the play was revived by Manhattan Theatre Club, and starred Kevin Bacon and Zeljko Ivanek, and later Alec Baldwin. The production was awarded the 1986 Outer Critics Circle Awards for best revival and best director, for John Tillinger. Orton wrote only three full length plays before his murder in 1967.

This black comedy takes place on the day of the funeral of Mrs. McLeavy. We meet her husband, Mr. McLeavy (played in Red Bull’s production by Jarlath Conroy), their son, Hal (the always excellent Nick Westrate), and her nurse, Fay (Rebecca Brooksher). As they are preparing to bury the coffin, we learn there has been a robbery at the bank next to the funeral parlor, and Hal’s friend Dennis (Ryan Garbayo), works at the funeral parlor. In an excellent bit of dramatic irony, we learn that the boys were involved in the robbery, and they must find a way to get the money out of the house.

The story unravels to include movement of the body of Mrs. McLeavy, a fiery car accident, a policeman posing as a member of the Water Board, and a stray eye. Rocco Sisto plays the cartoonish Officer Truscott, and Eric Martin Brown as Meadows.

Brooksher is well cast as the mischievous nurse Fay, who has been married 7 times in a decade. This becomes a running joke, as she proposes to both McLeavy and Dennis, in search of whoever has the most money. Brooksher has created a well developed and three dimensional character, and plays well with the physical comedy moments. She has great chemistry with Conroy, Westrate, and Garbayo. The chemistry of these cast members is important, if we are to believe they are plotting a scheme.

Westrate is also a standout. (Westrate won a special Drama Desk Award in 2012 for his versatility.) His performance hits all the right comedic notes, and we are still able to see his wheels turning as he develops the layers of the plan. Much of the physical comedy focuses around a stage left cupboard, which Hal keeps locked. On the performance I attended, the cupboard did not want to stay shut for much of the evening, which could have proven difficult for a lesser group of actors. However Westrate was always quick to slam the cupboard shut (as his character would), and draw our attention back to the story. Garbayo (as Dennis) is also excellent opposite Westrate, and the two share a great chemistry and rapport. The cast overall has a strong command of farce and the necessary pacing, creating an enjoyable ensemble.

One could compare Loot to a sort of Importance of Being Earnest set around the events of funeral, and under a lesser director, the comedy could be trampled by pacing or tone issues. Berger has gracefully mounted this difficult play.

I would recommend this to anyone, unless of course, you don’t like farce. The play runs a swift two hours (including intermission).

(Loot plays at the Lucille Lortel Theater, 121 Christopher Street, through February 9, 2014. Performances are Tuesdays and Wednesdays at 7:30PM; Thursdays and Fridays at 8PM; Saturdays at 2PM and 8PM; and Sundays at 3PM. Tickets are $20-$70 and are available at OvationTix or by calling 212-352-3101. For more information visit redbulltheater.com.)