Tickets can be purchased at telecharge.com 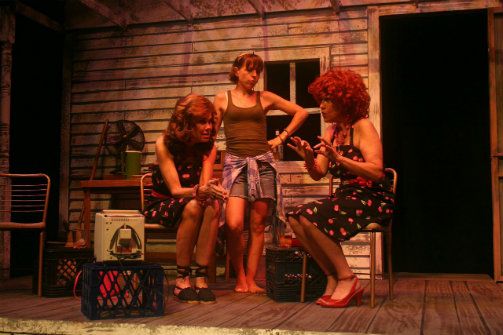 BOTTOM LINE: A dusty NYC remount of a Dallas production of a pair of one acts that was acclaimed in its original incarnation several years ago.

Contemporary Theatre of Dallas makes its New York City debut remounting their tried-and-true production of Lone Star and Laundry and Bourbon. These paired one acts are a regional standby, and during the acclaimed CTD productions in 2004 and 2006, director Cynthia Hestand was able to communicate the now late playwright James McLure (Pvt. Wars).

Laundry and Bourbon and Lone Star are set in a tiny rural town in Texas where everyone is down and out in some way or another. Both shows hinge on recurring themes of discontent, fondly remembered glory days, and tacit acceptance of the limitations of this life. However, since the plays are intended as comedies, there isn't much exploration or depth to the tragic circumstances and deeply-seeded problems of these characters.

Laundry and Bourbon was conceived as a companion piece to Lone Star, and the two scripts are tied together by the relationships between the characters. Lone Star focuses on unsettled Vietnam vet Ray (Joey Oglesby) and his goofy brother Roy (Mike Shraeder) drinking and wrestling behind a local bar. Fueled by beer, whiskey, and a run-in with his nerdy nemesis Cletus (Ken Orman), Ray’s violence and rage crescendo until a confession from Roy leads to an all-out brawl. “Laundry and Bourbon” takes place back at Ray’s house where his troubled wife Elizabeth (Marianne Galloway) is drinking, fretting, and neglecting her laundry when her sassy, social-climbing friend Hattie (Sue Loncar) drops by for gossip and highballs. These lifelong friends reminisce on the men and mayhem of their youth until gold-digging mean girl Amy Lee (Marisa Diotalevi) arrives to revel in her superiority and press her poorer friends to buy overpriced tickets to the Baptist Pancake Supper. As the ladies loosen up and liquor up, they snark and fight and reveal that none are in high cotton.

These are the kinds of muddy scripts that suck me into my dramaturge mind set. The arcs are wonky, the characters inconsistent, and revelations come unheralded from the thinnest of air. I want to fix it! Meanwhile the characters in one play are not quite as they are described by the population of the other, and based on contextual information, Lone Star must occur either the night before Laundry and Bourbon or shortly thereafter, but aside from overlapping back stories, the plays ignore some crucial information that should color both stories and not just one. Even their messiness isn’t cohesive: Laundry and Bourbon suffers from an excess of romantic language that doesn't accomplish much beyond painting a trite down-home diorama, while Lone Star collages jabbering and sporadic conflicts into dialogue.

While the scripts are problematic, the shortcoming is not helped by uninspired directing and a mixed ensemble of over exuberant or bland actors. It was clear the cast should have been better had they been guided to infuse their performances with specificity and dynamic choices.

The most accomplished element of the production is Rodney Dobbs’s versatile, detailed, and atmospheric set. I imagine the set as a sign post for the success of the first, fresh staging back in Dallas in 2004. Now these “local-color comedies” -- staged for a third time in 2014 -- have gotten stale as week-old cornbread. In both plays the characters constantly hark back to when things used to be better, and demonstrate no optimism that times will be good again. I imagine that has a lot of resonance with the production – I’m sure it used to be better, but I have little hope that it will be good again. When is it time to stop re-staging the same show?

I should point out that there were older members of the audience who laughed and enjoyed themselves. I saw two or three couples who -- by the second act -- were having a nice time. They were inspired to cuddle and reminisce, which is an amazing reaction to theatre and his production should be proud of eliciting that meaningful response from its audience. Maybe I’m just too stuffy to relax, ignore the faults, and enjoy. Or maybe because these plays were penned in the late '70s, they speak to an older generation in a way that I can't access -- in the same way that I can't get past the burlesque of "Three's Company." These two plays aren't polished, and the productions aren't at their full potential, but those things may be forgiven by viewers who tap into the nostalgia of the time and of Texas.