Written and Directed by Garrett A. Heater
Presented by the Covey Theatre Company
Part of the 2014 New York International Fringe Festival 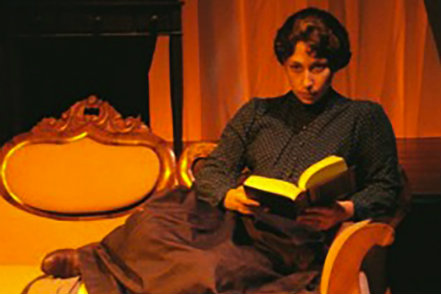 BOTTOM LINE: Everything you always wanted to know about the notorious suspected murderess; comprehensive if not exciting.

You’ve heard of Lizzie Borden, but do you really know the story? Her alleged crime, committed in Massachusetts in 1892, was immortalized in a children’s rhyming song, and the case has been oft depicted in fiction, dance, opera, film, TV and plain old history books. However, playwright Garrett A. Heater has set himself the task of creating “the most historically accurate” portrayal of Borden and her family. That’s a big claim, but his play, Lizzie Borden Took an Axe, is crammed full of details from the historical record. Unless you are a Lizzie Borden aficionado, most of these details will be new to you. (For example, did you know that Lizzie—or whoever killed her parents—did not in fact give anyone 40 whacks? Mrs. Borden received 19 blows, and Mr. Borden just 11.)

Heater directs his own script, and the results are mixed. For a play building up to a heinous double murder, there is surprisingly little forward momentum. It seems clear that Heater is in the “she did it” camp (Borden was actually acquitted of the killings, though no one else was ever prosecuted), but despite her numerous potential motives -- greed, fear, revenge, insanity -- the crime never feels inevitable. However, there are moments of keen psychological insight, such as the scene that shows Lizzie (Jodi Bova-Mele), post-murder, manipulating her friend Alice (Maya Dwyer) so that the latter’s suspicions are confused and transformed into guilt.

Notable performances are given by Carmen Viviano-Crafts as Lizzie’s demure but bitter sister Emma, and Sara Weiler as the much-abused housemaid who might have been the key to unlocking the mystery.

Blending scenes of domestic life, monologues, and voiceovers of excerpts from the trial transcript, Lizzie Borden Took an Axe has all the building blocks for a riveting drama. It never catches fire, but for lovers of unsolved mysteries and classic Americana, it might prove diverting.