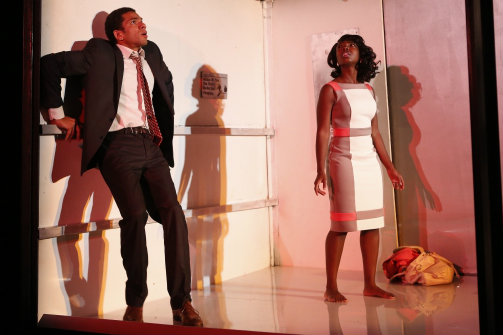 BOTTOM LINE: An incredibly directed, acted, and designed production of a heavy-handed and somewhat clichéd script.

It’s one of the highest-stake situations imaginable -- being trapped on an elevator with only one other person while the building you’re in is suddenly attacked by terrorists. That’s the situation that African-American co-workers Tina Pardon (MaameYaa Boafo) and Theodore “Big Time” Southmore (Biko Eisen-Martin) find themselves in in Walter Mosley’s new play Lift, now playing at 59E59 Theatres.

The majority of the play is focused on the entrapment of Tina, a Princeton graduate, and Theodore, who grew up with an abusive father and had to work his way up the corporate chain. During their time together, they reveal their deepest, darkest secrets to one another, and they are gradually brought together, both spiritually and physically. Mosley’s play has all the makings of an intense, high-stakes, character-driven drama. Unfortunately, the play lacks intensity. It felt to me like the focus was an exercise about two different people trapped in an elevator rather than on the development of the people who are trapped.

Mosley's occasionally clichéd dialogue and heavy-handed messaging don't help matters either. The message is that we're all alike, which is always a valuable message to relay, but it isn't presented in a very original or compelling fashion here. Some of the more serious lines even solicited inappropriate laughter from the audience. Additionally, there were many places where the play’s pacing dragged, although this could be the author’s attempt at emanating the characters' pain of waiting to be saved from a horrible situation. There is some very good character development in the second act, but I never completely cared whether Toni and Theodore would make it out of the elevator alive or not.

Fortunately, director Marshall Jones, III (also the Producing Artistic Director of Crossroads Theatre Company) has assembled a top-drawer cast and creative team to execute this production. Jones directs the play with a strong focus on the relationships among the characters. He manages to make the play’s clunky beats and shifts come across as subtle and natural. He is also blessed with two wonderful lead actors. Boafo and Eisen-Martin have wonderful chemistry and have crafted visceral inner lives as characters. The arcs that their characters go through is completely believable for every second of the production. Shavonna Banks (as Noni, Tina’s judgmental best friend) and Martin Kushner (as Resterly, the racist boss who may or may not have a connection to Tina’s past) are fine in their smaller roles.

A shout-out also must be given to every member of the design team for production: light and projection designer Rocco Disanti, costume designer Anne E. Grosz, sound designer Toussaint Hunt, and set designer Andrei Onegin. Collectively, these designers create a world that is slowly but surely going to ruin. The set mainly consists of an elevator elevated about sex feet above the stage, and a back wall for projections that simulate upward motion and explosions. A suspenseful atmosphere is created, where the audience never knows when the next catastrophe could strike. There are many sudden loud noises, so I wouldn’t recommend this play for the easily startled. However, I recommend this play to those looking for well-executed stagecraft in spite of the so-so material.