By Gianmarco Soresi; Directed by Max Freedman
Part of the 2014 FringeNYC Encore Series 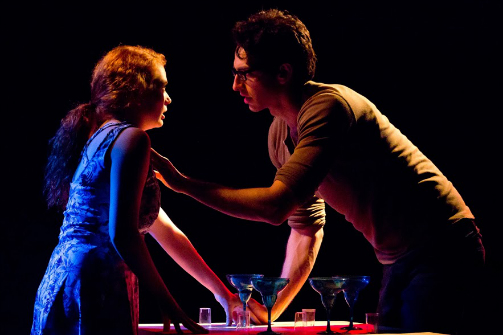 Kristin Parker and Gianmarco Soresi in <50%. Photo by Hunter Canning.

BOTTOM LINE: A romantic comedy that puts a greater emphasis on comedy than romance -- but can still manage to engage the heart.

Boy meets girl. Boy loses girl. Boy gets girl back. It’s a well-worn plot structure, and one that has found home in many a romantic comedy. But is it realistic? With the survival rate of any given marriage hovering at just under fifty percent, why do we remain continuously preoccupied with happily ever after? These are the concerns at the heart of <50%, the cynical yet sweet new play from actor/playwright Gianmarco Soresi.

Part stand-up comedy routine, part dramatic exploration of human connection, and, yes, part romantic comedy, <50% is the story of Soresi’s five-year relationship with his girlfriend, Laura (Kristin Parker), and the obstacles, both large and small, that occupied their road to a happy ending. Pairing autobiographical (and occasionally supremely meta) vignettes with a series of comedic soliloquies from Soresi, the play offers a view of contemporary romance that is simultaneously humorous and heartfelt.

Doing double duty as both playwright and leading man, it should come as little surprise that Soresi is the heart of this production. As a playwright, he has produced a script that expertly balances the saccharine with the serious, even as it is a bit overlong, and perhaps slightly more complicated than is necessary. As an actor, his comedic chops shine throughout, even as he is unafraid to return to the darker moments of his time with (and without) Laura. A montage of how he spent his time immediately following their breakup, for example, is a highlight of the show, primarily because of its ability to expose the humor that hides within sadness.

Director Max Freedman also deserves accolades for so organically orchestrating this play. While he’s been blessed with the talented duo of Soresi and Parker, it’s a rare occasion that a romantic comedy is staged with such honesty and nuance -- especially important here, considering the autobiographical nature of the material. Also impressive is Freedman’s ability to seamlessly navigate between Soresi’s comedic monologues and the more serious moments between Gianmarco and Laura, generating a healthy flow that invites audiences to fully invest themselves in this relationship from the very beginning.

If nothing else, <50% is a romantic comedy for people who’ve grown weary of romantic comedies. Rather than blindly accepting the promise of a happy ending, it challenges audiences to reconsider what such an ending would entail. Rather than insisting that romantic love is the ultimate achievement, it adopts a cynical view of the emotion -- while simultaneously acknowledging that true love can (and does) exist. Sometimes, however, you just have to fight against unbelievable odds to find it.