$14 for senior citizens and children 12 and under

Tickets can be purchased at www.galleryplayers.com or by calling OvationTix at 212-352-3101

Off Off Broadway, Musical Revival
Runs through 2.16.14
The Gallery Players, 199 14th Street, Brooklyn 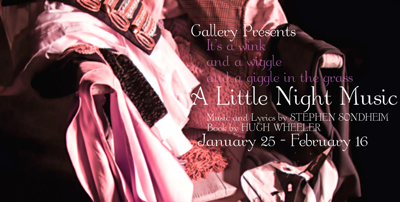 BOTTOM LINE: A weekend in the country is the least of problems for a washed-up stage actress and her lovers, and their wives, and their servants. A Little Night Music is a sneakily biting good time.

As far away as South Slope is from Broadway, you’d think you were closer when the curtain rises on the Gallery Players’ production of Sondheim and Wheeler’s period comedy/drama based on an Ingmar Bergen film. The neighborhood company releases a fervid amount of talent and grace in an already spectacular story. It shouldn’t surprise us that smaller theaters in New York pack just as much punch.

Those who are familiar with Sondheim fare will not be disappointed with the Gallery Players’ interpretation. The story of a great actress Desiree Armfeldt (played by Broadway actress Rita Rehn), who comes to town to perform (and stay in old beds) is still as funny and heartbreaking. After noticing him during a performance, Desiree rekindles a romance with the married but repressed lawyer, Fredrik Egerman (Richard Rowan). Trouble mounts, however, when Desiree’s other lover, Count Malcolm (Rob Langeder), catches whiff of the new affair. The action spins in dizzying directions afterward, expertly underscored by Sondheim waltzes.

The Gallery Players produces a great ensemble of trebly tenors and sopranos that make you weep. Rehn is a true anchor, although her interpretation of Desiree is a touch more modern than the rest of the cast. Likewise her lovers, Langeder and Rowan respectively, were each satisfyingly present and complex. It’s a quirk of mine to spend time on the supporting characters, though. In a show like this one no one seems secondary, however. For example the operatic quartet, effortlessly portraying a Victorian Greek chorus, is an ear’s delight. I was equally enwrapped by each female role beginning with Emily Stokes’ airy and juvenile Anne Egerman, the naïve ingénue who’s captured the heart of Eagerman senior and junior, alike. Stokes’ portrayal is seamless as she hits beautiful notes, but still manages to hit the punch line. Anne is accompanied, for ill and not, by the devastatingly low Countess Malcolm, played with delicious saccharine by Barrie Kreinik. Kreinik’s voice lifts the rafters and her comedic timing is glorious. A woman fatigued by her philandering husband seems very unfunny, yet her lines were some of the best delivered.

Of the female roles none is more emblematic than Madame Armfeldt, the boldly honest mother and grandmother in the story. Played by the likes of Elaine Stritch and Angela Lansbury, this production’s Judith Roberts invigorates the wicked elderly woman in the wheelchair. The audience can actually see the swirl of memory floating above Roberts’ head. To round out the women — of course with a generous bow to Kate Semmens as the precocious Fredrika — is Petra, the Egerman’s maid, played with crisp and sizzle by Kiley Caughey. When Caughey sings “The Miller’s Son” I don’t doubt it’s just as Sondheim’s complicated mind intended. Yes, the women in this show rock.

As do the men: again, I am inclined to applaud Rowan and Langeder for playing opposing gentlemen with considerable reality and spunk. Then there’s the younger bunch, mostly represented by a few servants but also the marvelous Robbie Torres, who plays the tormented lawyer’s son, Henrik Egerman. Torres offers this masochistic role with great generosity. His timidity is interesting and his voice is simply beautiful. I wonder if every Henrik can play the cello so well. The cast is simply inspired; many claiming Night Music as their debut with The Gallery Players.

If when you are looking for a piece that lilts with sumptuous music and costumes; a piece that borders between a dream and the past; a production which is so close to home, but also tirelessly immaculate, go see the Gallery Players’ production of A Little Night Music. Be sure to laugh at Anne’s varied attempts at inquiry at the theatre or Henrik’s unending libido; there’s the often farcical entrance of the stunning quartet’s “I live the fabulous life” and then there’s all the eccentric messages from Madame Armfeldt’s offensive mouth. However, be sure to also notice Kreinik’s heartbreaking realizations or Rehn’s dismay, these are equally captivating. You’ll even catch those in transition during intermission still embodying their character to a T. I offer a hearty bravo to this production and its theater; a place good theater seems to thrive.

(A Little Night Music plays at the Gallery Players, 199 14th Street, Brooklyn, through February 16, 2014. Performances are Thursdays and Fridays at 8PM; Saturdays at 2PM and 8PM; and Sundays at 3PM. Tickets are $18 for adults, $14 for senior citizens and children 12 and under. Tickets can be purchased at www.galleryplayers.com or by calling OvationTix at 212-352-3101.