By Eugene Ionesco; Translated by Michael Feingold; Directed by Darko Tresnjak
Produced by Theatre for a New Audience 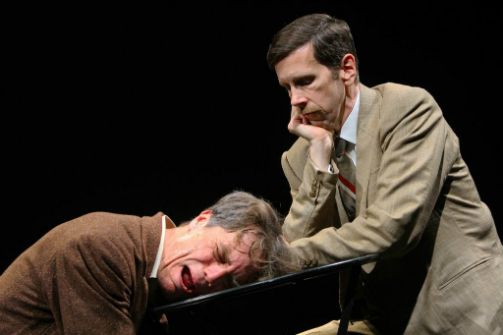 Michael Shannon and Robert Stanton in The Killer. Photo by Gerry Goodstein.

BOTTOM LINE: A rarely seen play by a 20th-century master gets a slick but somewhat overbearing revival.

Now wrapping up its first season in its brand new home near the Brooklyn Academy of Music, Theatre for a New Audience presents The Killer, a rarely seen 1957 work by Eugène Ionesco. It’s an overly long but absorbing play about fighting evil in the face of official and popular indifference, and it stars Academy Award–nominated actor Michael Shannon (Revolutionary Road, “Boardwalk Empire”) in what is, for him, a strangely flat performance as the both comically and tragically naïve Everyman named Berenger.

Shannon excels playing dangerous aggressors but hasn’t quite succeeded in getting underneath the skin of the blindly hopeful victim that is Berenger, despite the fact that this is his second crack at the role. (He performed it in Chicago in 1998.) He seems to look at the character from the outside and plays the part with a realism that doesn’t work. A few years after The Killer premiered, Ionesco wrote an essay extolling “imaginative truth” over the “narrow truth” of strict realism and, while other aspects of this revival capture that difference, Shannon, unfortunately, does not.

Director Darko Tresnjak, a Tony Award winner earlier this month for A Gentleman’s Guide to Love & Murder, here helms a very different tale of homicide and mayhem. Ionesco blends music hall farce and Kafkaesque terror to position The Killer in a place that will be familiar to students of his work, which is somewhere between life and a dream. All around Berenger are townspeople who appear to know about the startling existence of a serial killer on the loose in their city but who, as in a nightmare, seem strangely unfazed about the situation. Once the murderer strikes a young woman with whom Berenger has become smitten (the electrifying Stephanie Bunch in a brief but showy role), our hero launches into a desperate campaign to track the perpetrator down, only to see time slip away in the face of vaudevillian distractions (including an entertaining bit with a missing briefcase) and a blasé populace that has come to accept, even embrace, the killer in its midst.

It’s all very strange but, then, what isn’t? For Ionesco, absurdism is a form of realism, and reality is the true nightmare. In the background of Berenger’s journey is an emerging tyrant named Ma Piper (the Obie-winning Kristine Nielsen), who lulls her gaggle of followers with Orwellian platitudes that could be plucked from today’s headlines with depressing ease: “We will not colonize the people but occupy their lands to liberate them,” she proclaims. “Forced labor will be called volunteer work. War will be called peace.” Actors playing her supporters wander through the audience, enlisting us to the oppressor’s campaign, speaking lines directly into our faces, implicating us in the rising tide of evil.

All of this unfolds against a backdrop of an Expressionistic and noirish dreamscape, beautifully conjured by Tresnjak’s creative team. His longtime collaborator Jane Shaw creates an underlayer of music and sound, starting out as the soft noises of city traffic and building to a cacophony of offstage voices and discordant tones. Matthew Richards’ hauntingly effective lighting design ranges from the subtle shifts that reveal and conceal hidden corners of Berenger’s city, to bold, chilling images, like the giant silhouette of a fan that seems to hover over the stage at the top of the play.

Michael Feingold’s translation of the script from the French, meanwhile, is clever and clear, as in a passage in which Berenger struggles to describe his spiritual emptiness. “As far as inner light is concerned,” he asserts, “my electricity’s about to be shut off for nonpayment.” There are a lot of enjoyable nuggets like that. The primary problem is that Ionesco doesn’t trust his own storytelling and the evening runs unnecessarily long, unlike the simpler, more direct masterworks Rhinoceros and Exit the King, which also feature a similarly hapless character named Berenger.

Tresnjak’s large ensemble is fine, although only two of the four headliners are solid. Nielsen, who can be razor sharp in the dark comic world of Christopher Durang or Charles Busch, is energetic in dual roles here but ultimately uninspired. The two best performances of the evening are from Robert Stanton, as the municipal architect who is merely irked that the serial killer is spoiling the perfect order of his city, and the great Paul Sparks, as Berenger’s shady friend, Edward.

Stanton’s government official strikes a precise balance of chilly efficiency and barely concealed menace. In some ways, he is the embodiment of the city. As with Suttirat Larlarb’s sleek, minimalist set, which every now and then belches tufts of steam from below deck, Stanton’s character is a study in compulsive order covering a layer of bristling impatience for anyone who seeks to break out of the box of convention. Stanton’s comic timing is particularly great as he pulls various props out to keep the well-timed machine that is his job moving forward -- a landline telephone from his suit pocket, a desk and chair seemingly out of nowhere. And Sparks, who is a frequent collaborator with co-star Michael Shannon, is a master of comic intensity, perfectly cast as the creepy, yet somehow endearing fellow with the briefcase spilling over with incriminating evidence.


(The Killer plays at Theatre for a New Audience’s Polonsky Shakespeare Center, 262 Ashland Place, Brooklyn, through June 29, 2014. Performances are Tuesdays through Fridays at 7:30PM; Saturdays at 2PM and 7:30PM; and Sundays at 2PM. Single tickets are $60-85 and are available at OvationTix.com or by calling 866-811-4111. For more information, visit tfana.org.)