Keep Your Electric Eye On Me

Off Off Broadway, Performance Art
Runs through 5.10.14
HERE, 145 Sixth Avenue 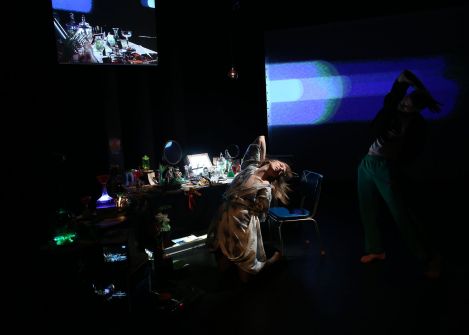 Madeline Best and Carlton Ward in Keep Your Electric Eye On Me. Photo by Paula Court.

BOTTOM LINE: The collage of live, recorded, and found footage creates an experience that is deeply alienating yet startlingly familiar in relation to our use of social media to distribute and consume lived experiences.

Somewhere between performance art, experimental dance, and a bizarre YouTube tutorial found in the dark reaches of Tumblr, Keep Your Electric Eye On Me is strangely enjoyable and insightful. A set of performed and projected patterns concentrated into 13 ‘tracks’ (as the Artists' Note calls them), the piece lacks any traditional plot. Instead each section, or ‘track,’ presents a set of movements combined with recorded visual and audio material evocative of many human situations, while remaining specific to none. The piece follows ‘She’ (Madeline Best) and ‘He’ (Carlton Ward) as they interact. At all times their relations are followed and altered by the video and audio editing of ‘Us’ (Shaun Irons & Lauren Petty are at the side of the stage surrounded by equipment for the entirety of the show).

Brad Kisicki's set design creates a slightly sinister dreamscape that allows the performers to explore human relationships in an age dominated by the mixture of in-person, live, and pre-recorded interactions. Stage right a table overflows with props. Vials, chalices, glass containers, rotating tables, screens, and other paraphernalia obscure the table they rest upon. Three large screens cover the back of the stage, a short loop of a light surrounded by cloth projected onto them. Stage left three large cameras shoot live footage of the set. Slightly behind these, a projection on a smaller screen shows a dancer repeating the same movements in a loop.

As the piece begins the looped projection of She dancing begins to change. The image of She becomes frozen ghostly for a moment on the screen. Then She enters the stage as a live performer. Suddenly all the myriad of other looped visuals also begin to change. The music builds. She enters into a frantic dance before falling to the ground, as if thrown by some force of desire. He enters the projection of She dancing and attempts to strike the same pose as the ghostly image still lingering. At this point the soundscape, the loops, and the aesthetics of the performers shift. We have begun a new set of patterns, a new track. She rises from the floor and begins to slowly strip while walking towards one of the cameras. Projected footage alternates between She walking in a deserted warehouse and the live image of her approaching the camera. He watches in rapt and slightly creepy suspense. When She reaches the camera He extracts a large green crystal-like candy from her mouth and places it in a jar with many others.

Every track establishes some pattern of interaction between She and He. In most, if not all, She presents an activity, a movement, or a moment that He watches and then attempts to imitate. Often He will prefer to watch She through a monitor or projection instead of actually looking at her. The rare moments when the performers speak, they do so into microphones so that we hear them more through the speakers than from their own voices. While She and He often touch, there is some quality that He is constantly straining to connect with that always remains unattainable. Whether erotic, athletic, or mundane the connections and imitations that He creates remain lacking.

As performers, Best and Ward are mesmerizing. Their performances are committed and masterful. Despite a strangely high number of upsets, including a glass shattering on the stage and the fire alarm being set off, they remained in character, in the moment, refusing to let us go. The costumes, candies, and tabletop installation created by Amy Mascena at first appear as a jumbled directionless mass. However as the piece progresses the control and the significance of these creations becomes clear.

Keep Your Electric Eye On Me explores the rarified world we now inhabit. Our daily relations are a mix of live projections, recorded moments, shared footage, and increasingly sparse in person interaction. The setup in the piece seems alien, however moments of blinding familiarity appear. Hazy associations with YouTube, Instagram, TV, and Tumblr appear that make the strange seem familiar. The live feeds, pre-recorded material, and found footage interact, intersect, and then contradict creating a plurality of meanings. This performance will continue to haunt and intrigue me for quite some time.